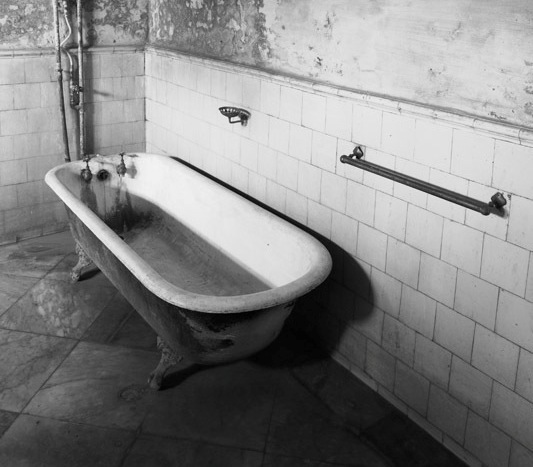 Greg Mollin is a fiction writer living in Orange County, California. He has been involved in everything from hardcore punk music to graphic design and even a stint as writer/performer on a popular cable television sketch comedy show.  His short story, The Monster on Myers Avenue, was recently published in Dark Moon Digest #3. He is currently at work on his first novel.

Click here for a PDF of version of  Where The Fault Lies or read it below.
This story appears in the Gothic Blue Book, get your copy today!

Where the fault lies

Morris stared down at the empty bathtub. The shiny surface sent back the ghost of his reflection. He had scrubbed the thing until he couldn’t move his arm. His shoulder felt dislocated. His right hand was cramped into a claw. The stain just wouldn’t go away.

He sat back against the toilet and pulled his legs to his chest. His body shook and tears strained under his lids. It was no use. He let out an agonized yell that echoed in the empty bathroom. He screamed. He cursed God. He pounded his fist into the tile underneath him until he felt bone shatter. He wrapped his arms around himself and rocked back in forth like a traumatized child. Morris read the words on the side of the tub and remembered.

He was in his home office working late to meet a deadline. Between bursts of jazz piano coming from the stereo he could hear Alex down the hall splashing and playing in the bathtub. He had ran the bath and left his son to play while he got back to work. His wife would be home soon and she would finish bathing Alex. He just had too much to do.

He was so distracted by the work and the sounds of Thelonious Monk on the stereo that he didn’t notice when the noise from down the hall stopped. It was Karen’s voice screaming, pleading from the bathroom that broke his concentration.

He found her holding their young son. His face was pale and lifeless. The water in the tub was translucent red, like diluted punch. Alex was wrapped in a blue towel and he could see a dark spot growing where Karen held it against the back of his head.

“What the hell happened, Karen?” he screamed. He took Alex from her and brought him down to the floor, cradling his head as he laid him on the bathmat. Alex’s eyes and mouth were open, staring in awe at something beyond his face. The unblinking gaze went right through him as he pumped on Alex’s chest and hurriedly attempted to breathe life back into his four year old son’s lungs. Karen stood over him screaming.

“I told you to put those grips in the tub! I told you!” She yelled until her voice was hoarse.

Morris worked on his son for twenty minutes waiting for the ambulance to arrive. Five minutes in he knew it was too late. Alex just laid there, eyes wide open and staring in lifeless wonder.

Karen blamed him for Alex’s death. She said it was his fault that Alex had slipped and hit his head. If he hadn’t been so goddamned focused on work and been paying attention to his son, it never would have happened.

Morris never argued with her. She was right. He should have put those rubber grips in the bathtub like she had asked him to a million times. He should have been sitting on the edge of the tub watching Alex play instead of working. He should have kept his son from dying.

The funeral came. Months passed. He stopped working.  He picked up a glass and filled it with whiskey. A bottle a day habit ensued. One day moved into the next. The grief and guilt consumed him. His wife no longer spoke to him. She wouldn’t even look him in the eye.

One night Morris came home from the store to find Karen on the living room couch, an empty bottle of vicodin clutched in her dead hand. Her suicide note had been simple. Only two words, “Your fault.”

Now he sat screaming and crying in an empty bathroom in an empty house, fighting the madness threatening to overtake him.

He stood up and wiped his face with a mildewed towel hanging next to the sink. His hand was throbbing. It was swollen and felt as large as a catcher’s mitt.  He could barely wiggle the fingers. It was broken for sure.

Morris walked into the kitchen and grabbed an ice tray out of the freezer. With his good hand he knocked the ice out and scooped it into a plastic bag. He stuck the broken hand into the bag and poured a glass of whiskey from the open bottle on the counter. He drained it in two burning swallows and poured another. The events of the past few days came rushing back.

The sound woke him from a restless sleep two days earlier. It was Karen’s voice calling from down the hall. Morris sprang from the bed and almost broke his neck tripping over his boots on the way out of the bedroom. He ran half awake down the darkened hallway and into the bathroom. There was no one there, only the empty white deathtrap smiling at him in the moonlight.

The next morning the stains appeared.

He was emptying his bladder when he caught the reflection of the tub in the mirror over the sink. A discoloration had materialized on the side of the bathtub. He knelt down and brushed a hand over the smooth surface, not really believing what he was seeing. There in what looked like finger strokes, a single word stood out in a grayish stain against the gleaming white tub. “fault”.

Morris spent forty dollars on cleaning supplies that day. He scrubbed and sprayed but nothing would wipe the marks from the tub.

He drank himself comatose before the voice could call to him again that night.

Morris woke in Alex’s room the next morning surrounded by the boy’s stuffed animals and toys. He could still smell the faint traces of his shampoo on the pillow. The clean smell brought him back to  nights spent sitting on the edge of the little bed, reading to his son until his eyes closed and he drifted off to peaceful sleep. So different than the dead stare that remained in his mind now.

When he made his way into the bathroom that morning he saw that the single word had found a partner. More finger strokes in ghostly gray. The accusation screamed at him from the tub, “your fault”.

He wrapped his hand in a towel and walked into his office with the bag of ice and the bottle of whiskey tucked under his arm and sat down in front of the glowing monitor on the desk. Emails from friends and family were lined up unread on the screen.  He selected them all and hit delete. He didn’t want to hear any more condolences. He didn’t want to know how many people were there for him. He just wanted to disappear. He took another burning swallow and leaned back in the chair. He closed his eyes and sleep took him in an instant.

He woke with a start, spilling the bottle of booze across the paper strewn desk. He grabbed for it. Fierce pain reminded him about the shattered hand. The house was dark. The cursed voice calling to him as it had the previous nights. The spirit would not allow him to rest.

“Shut up!” he yelled back at the voice, cradling the broken hand in his lap. “Why waste your fucking breath! I know it’s my fault, you bitch!” The bottle was lying on its side, the contents pooling underneath it. He picked it up and took a long drink. His vision blurred and he fought back vomit rising in his throat.

The house was silent again. Morris stared through the darkness down the hall. He twisted a fist in his eye trying to clear his vision. He didn’t know whether it was the booze, lack of sleep or insanity, but he thought he could see the moonlit silhouette of his son standing in the bathroom doorway.

“Alex! Is that you?” he asked, setting the bottle down and standing from the chair. He tried to move quickly around the desk and banged the bad hand against the edge. “Goddamn it!” he yelled, clutching the wounded hand. The figure receded fearfully into the darkness. He started to cry. The pitiful sound of his own voice horrified him.

The shadow vanished. From the bathroom, the voice spoke again.

He stepped around the desk and the room began to spin.  He felt his feet disappear under him, replaced by his knees and then his face. The dark shape was waving its arm, beckoning him into the bathroom. He tried to pull himself from the floor. The vision disintegrated as blackness overtook him.

When he opened his eyes it was morning. Sunlight seeped through the office blinds. The agony in his hand was now accompanied by a leaden pounding in his head. There was dried blood on the wood floor under his face and his jaw was stiff and difficult to move.  The hallway was glowing with light from the bathroom window like an invitation. He wanted no part of that room and the spectral scrawl.

He stood slowly, bracing himself on the doorway. He moved in a daze back to the desk and sat down in the swivel chair. He reached down and opened the top drawer. A black 9mm pistol sat on a stack of unread cards. He tried to pick it up but the broken hand was now swollen to the point of uselessness. He picked it up with his left hand and tested the weight. Morris wrapped his index finger around the trigger and raised the weapon to his temple. It was awkward but he thought he could keep the thing steady enough to do the job right. He’d seen the news stories about failed suicides. He didn’t want to end up a vegetable. He wanted to die.

There was a picture frame lying next to the computer where the bottle knocked it over. It was a family shot of the three of them at the county fair. He had Alex on his shoulders and Karen was smiling widely. Morris remembered how Karen had struggled to hold the camera out far enough to get them all in the picture. He smiled at the memory and felt tears running down his cheeks and into his beard.

“Morris! Morris! Come quickly!” The voice echoed down the hollow hall. The words repeated, pleading to him.
But he only smiled. Not this time. Not ever again.

Police are in the house the next day. A neighbor heard yelling the night before and then called after hearing what sounded like a gunshot. The neighbor fills them in on the history of the dead man and the case is deemed a suicide. The only puzzling element is the bathroom.

Words are written on the tub in what looks like the sloping finger marks of a young child. The forensics team has not been able to figure out what was used to write the phrase but judging by the scour marks around the gray text, someone tried very hard to remove them.

There on the wall of the tub, three words stain the clean white surface, a message intended for a father who would never see it finished.

This story appears in the Gothic Blue Book, get your copy today!

12 thoughts on “Where The Fault Lies”