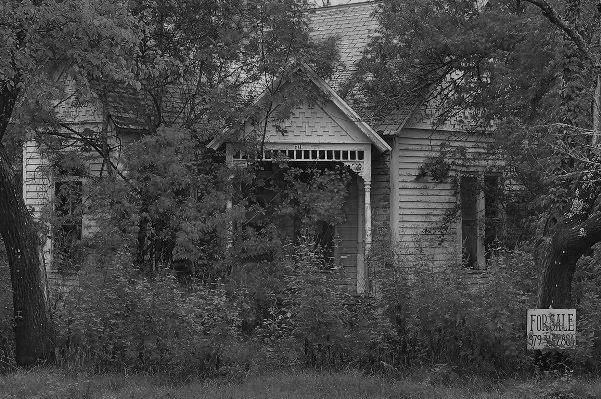 Every small town has that house, that suspected haunted house we’re told to avoid. Not all of us avoid it.

Megan Fairbrace is a speculative fiction writer and an all round horror enthusiast living in Kent, England. In between writing stories about haunted houses and boogeymen, Megan is an English student, studying for her BA.

They Always Do
By: Megan Fairbrace

It could be pouring with rain, but that won’t stop you. You’ll drive along with the radio turned up just loud enough so that you won’t be able to hear the drum of rain against the roof of your car. The temperature might be starting to inch towards single digits but you’ll just turn up the collar on your coat and crank up the heater to stave away the coldness in your lungs. Or, maybe the weather will be nice, the middle of summer perhaps. Maybe you’ll drive with the windows down instead with the sun beating down on your face. Your throat will tighten and beads of sweat will start to bubble on your forehead, of course you won’t be able to tell if it’s from the heat or from the ache of anticipation. Either way that half empty bottle of cheap cola that’s been rolling around in your car for days will start to look pretty good. You’ll have wanted to visit this place for some time, won’t you? Maybe you’ll hear about it from some guy in a lonely corner of some bar, from one of those websites listing abandoned buildings for would-be adventurers, or maybe you’ll recall this place from the hushed voices of town horror stories, but either way it won’t matter. None of it matters, not really. Whatever the day, the time, the weather, the reason, you’ll still find yourself on that forty-mile stretch of road and that’s what will be important.

At some point during the drive on that lonely road to nowhere, your mind will probably start to wander and you’ll find yourself drawn back to that same, tired question: are you really going to do this? Are you really going to go through with this? You’ll have thought you committed to your decision when you left, but you’ll start to doubt yourself and play over every tired possibility, you masochist. The next exit will come up fast and all the while your hand will hover over the indicator. Your curiosity will get the better of you though; you just can’t help yourself. The exit will pass and you’ll stay on the road. You can’t stay away.

Soon enough the time will come and you’ll pull up outside and take the key out of the ignition. You might need a minute to gather your thoughts, or perhaps you’ll be so pumped with adrenaline and anticipation you’ll burst out of the car the minute you cut the engine. The house will look different from the way you’d imagined it or from the other decrepit, boarded-up shacks you might’ve had the courage to explore before. The house will be immaculate, pristine. No wooden planks nailed to the windows, no broken glass and if it wasn’t for the overgrown mess of garden, you would never fancy it as abandoned. You’ll probably need a moment to catch your breath; even the most notorious of vacant buildings are not vacant for long. Vandals, doped-up squatters and wide eyed adventurers all make themselves at home at some point and so the bricks should be blackened with graffiti and the porch should be littered with shattered glass and discarded cider bottles. This will be your last chance to turn back; no one would blame you if you do. The thistles will catch against your clothes as you navigate your way to the front path as if to try to hold you back, to stop you. You’ll no doubt ignore the symbolism and your hand, clammy with cold nerves, will grip the handle to the front door. The point of no return. You will pull. The door will open.

Things will seem normal enough at first; you’ll gingerly tread across the hall and further into the downstairs rooms. You’ll forget your earlier hesitation and marvel at the furniture and the carvings, forgotten in time and preserved only by a thick layer of dust. Maybe you’ll take pictures, maybe you’ll jot down notes, inspired by your new surroundings, for that novel that you’ll never get to write. It could be the middle of the day or maybe the sun will have already gone down, but either way the thick dark shutters will stream only dregs of sunlight through the windows and you’ll no doubt find it increasingly difficult to see. The last remaining light will cast contorted shadows across the room that seem to shiver and pulsate in time to your own now racing heartbeat. You’ll start to tread more delicately, daring yourself to move further into the house, promising yourself frantically that this will all be worth it. You’ll want to rush, want to finish what you came here to do but the light from your torch, if you were smart enough to bring one, will start to flicker as the batteries suddenly begin to strain for the last drop of power. The shadows will melt into the darkness and your arms will fly out in front of you, groping for the exit. The front door will be locked, of course. You’ll start to panic, start to retrace your steps, search for any other way out but there’s only one way out of this house. There always has been. You’ll bang on the heavy oak door but all that will achieve are bloodied knuckles and the sound of your pounding will be broken only by the sound of your own soul-wrenching screams of terror. The darkness will be unbearable now and with every intake of breathe, it will bleed deeper and deeper into you; consuming you. The terror will be suffocating by this point you won’t know for sure that what you’re seeing is real or merely the remnants of your own fractured sanity. Your hands will fly to your face; fingernails sharp as if to try to claw the very image out of your eyes and soon the metallic tang of blood will mix with your tears and burn your eyes. No amount of blood or tears will ever blur what you’ll see though. You’ll pull frantically at the door handle one last time, but it won’t open. It never does.

Eventually someone will find you. They’ll see your car, parked outside and abandoned, and on a hunch they’ll tread carefully through the garden of weeds to the front of the house. The door will open without a problem. You’ll try to tell your story but they’ll mistake your babble of terror for insanity and your story will be tainted with doubt. They’ll never believe what you saw. They’ll say you’ve lost your mind and you’ll spend the rest of your days sucking down pills from paper cups. You’ll be a local legend. Children will tell stories about you around soft campfires and chant your name in darkened rooms for cheap thrills; just another small town nut case. But someone will believe you; someone somewhere will hear about your story and see the glimmer of truth. They’ll do some research of their own and come across hushed accounts on Internet forums or yellowed newspapers from defunct prints. Or, maybe they’ll hear about this place from that same guy in the lonely corner of that same bar, from the same website listing abandoned buildings for would-be adventurers or maybe they’ll recall this place from the hushed voices of their own town horror stories. Either way it won’t matter, more will come. I know they will, they always do. You did, after all. And I’ll still be here. I’m getting so tired, but I’ll still be here. I’m always here.