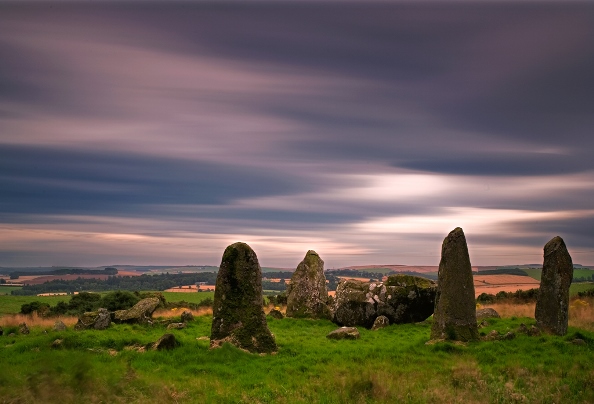 It is best to know an areas local superstitions before wandering about exploring.

Andrew Richardson lives in Wiltshire, England, with his wife, son, and a hamster. When not writing or working as a science administrator Andrew visits historical sites, watches his favourite football team, and takes long walks over rugged countryside. His lifelong interests of horror fiction and history often combine to provide inspiration for his writing, which includes three novels and several shorter pieces. For more on Andrew http://andrewjrichardson.blogspot.co.uk/

The stones stood still, silent and unwelcoming.  Darren’s shudder wasn’t just in response to the frost.

Darren stopped as Alice paused beside him.  Her hand was soft and warm in his, an antidote against dawn’s chill.  The new ring was a solid band around her finger, and touching it helped dispel the cold.

Alice pointed.  “Four…five stones.  Let’s count them.  And I remembered the guidebook.  We can see if they’re mentioned.”  She tapped her jacket pocket and clear blue eyes smiled at Darren.  “Don’t they look pretty, sticking out of the frost?  I think there’s seven, including a couple over there that have fallen over.”

“Yeah.”  Darren followed her finger.  He tried not to think the stones were glaring at them.  “Can’t we just pick up some firewood?  We can come back when it’s warmer.”

“Oh Darry!  We haven’t even opened one wedding present yet, and I’ve already discovered you’re allergic to coal dust.  Now I find out you’re a stick-in-the-mud with no interest in history, either.  What other secrets have I got the rest of our lives to discover?”

“Loads.”  He threw his arms around her slender waist.  He picked her up, spinning her round so her blond hair trailed after her.  “I’ve got five mistresses on the go, debts running into thousands, and I wear my sister’s clothes every Friday night.”

“Well, you’ve no need to grovel to your sis now.  You can borrow my dresses any time you like.  No need to ask.”  She slid from his grasp and her delicate lips curled upwards.  “I’ll bet you’d look great in one of my thongs.”

“Not as good as you look, darlin’.”  His hands fell to the zipper of her jeans.

“Get off – at least until we get back to the cottage.  Someone might come.”

“Yeah, me with any luck.”  Darren gave what he hoped was a cheerful leer.

“Don’t be disgusting,” she said, but with an added giggle.

“I thought you could take my mind off these stones.”  Darren glanced to a monolith, and told himself it wasn’t staring back.  “I can’t help thinking they’re watching us.”

Alice flicked her eyes to the sky.  “We came out here at the crack of dawn for firewood.  If it wasn’t for your coal dust allergy you could be having your wicked way with me and doing your primeval grunting in front of a warm fire.”  She reached into her jacket.  “Instead, what do I get?  My husband whinging about the cold on our wedding night, then getting spooked by stones.”

He gave her nose a playful flick.  “I don’t grunt primevally.”

“Humph.  Anyway, you were the one who wanted to spend your honeymoon in a cottage beyond the edge of civilization.  It’s not my fault it doesn’t have central heating.”

She gave a playful swipe and pulled a pamphlet from her pocket – ‘England’s Peak District: History for the Visitor’.

Darren glanced at the brooding stones.  In the distance, bells summoned worshippers to Sunday’s service.

Alice opened the booklet.  “There’s got to be something about the circle in here,” she said.

“Yeah.  Why don’t you sit on that log over there and concentrate on looking gorgeous.  Relax and make yourself comfy for a nice rest.  Don’t worry about me, risking my back to pick a few humble sticks to keep us warm.”  He put a hand to his spine and gave an exaggerated wince.

“Humph.  You’re the one with the coaldust allergy.”  Alice’s eyes flicked to skyward again.

Darren picked up a twig lying at a stone’s base.  He patted the rock.  “I know you’re alive,” he said into two grooves that could have been eyes.

Darren stepped back.  Agony coursed through his leg, pulling at his ankle, twisting his foot, trying to snap his bones.  He fell, clasping the pain and gritting his teeth.  “Shit,” he said through clenched teeth.

“Are you okay, Darry?”  Alice leaned over him and her soft features almost drove the pain from his mind.  “What happened?  Can you walk?”

“I can wiggle my toes, so I don’t think it’s broken.  Bloody rabbit hole, I think.  Shit.”

“I suppose this is just a ruse to get me to collect wood while you sit around watching?”

“Yeah.  You rumbled me.  I nearly bust my ankle so I get to lay about in the frost for five minutes.”  He gave a half wince, half grin.

“Okay, Darry.  You sit down – here, lean your back against this log – and I’ll collect some firewood as quick as I can.”

“Don’t be long.  I’m cold.”  Darren tried to sound pathetic.  “I think I might be getting frostbite.”

“Baby.”  She tossed the guidebook in his direction.  “Here.  Make yourself useful instead of aimlessly freezing to death.  See if the stones are mentioned.”

“Right-ho, nurse.”  Darren looked at the brooding monoliths before flicking through the pages, occasionally blowing on his fingers to warm them.  He winced as he shifted his foot, and to his surprise found the circle.  “Hey, Alice, they’re in here!”

“Really?”  She clasped a pile of twigs and looked up.

“Yeah.  On the third page.  Not a good picture though.”  Darren let a fantasy push the monoliths from his mind.  “It’d look better if they’d got you to model on page three instead.”

“Pervert.  Just read it out.  I think the cold’s getting to me.  I’m feeling all stiff.”

“Not as stiff as I’d feel if you were on page three.”  Darren read.  “’The stone circle, known locally as the Seven Sisters, is an ancient feature avoided by villagers.’  That must mean you’re right.  There’s seven.  ‘Local legend says…’”

“Honest, Darry.  I think I’m catching something.  My joints are all seizing up.  Darry!  Help!”

“Alice?  Darren jumped up, ignoring the pain in his ankle.

“Darry!  Help!  I can’t move!”  Alice stood rigid over a pile of dropped sticks, her face grey and colourless.  “Darry!  I can’t move my back or my legs…or…my…arms…oh…my

…God…I……can’t……Darry!”  Her voice slowed and dropped, like a record played too slowly.

Darren limped toward his wife, shouting her name as she greyed and her clothes became as one with her body.  By the time he reached Alice her mouth had silenced.

She stood still.  Even her blond hair was as grey as the stones.

Darren’s eyes dropped to the book he still held limply in his hands.  ‘Local legend says the Seven Sisters are named after young women who were turned to stone as punishment for collecting firewood on the Sabbath.’

He could do no more than watch open mouthed as, before his eyes, the woman he loved became an eighth stone of the circle.