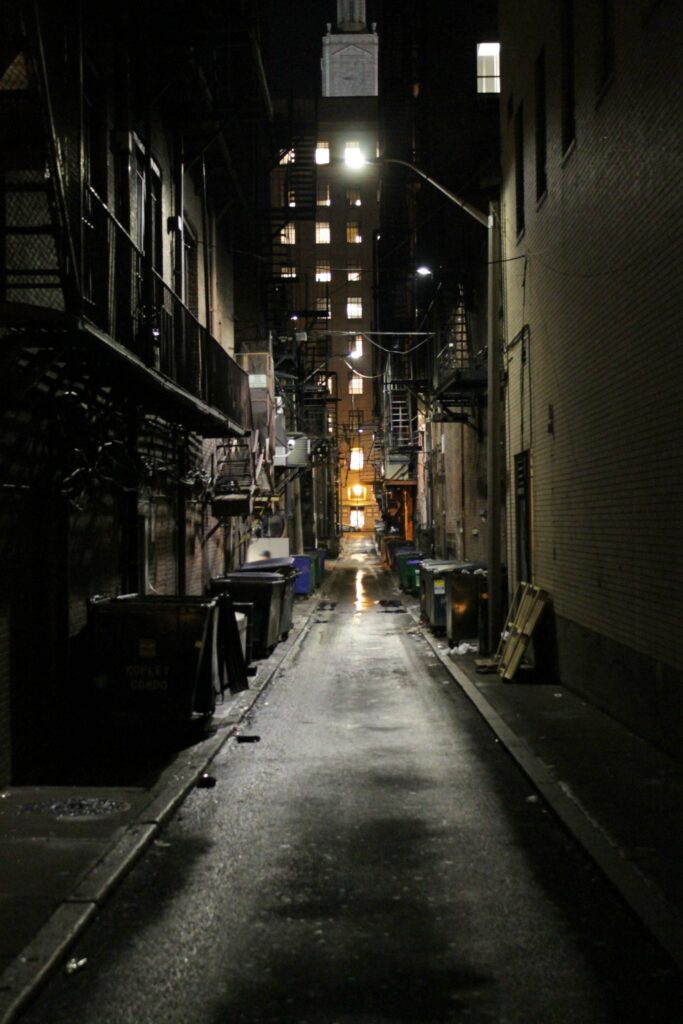 Putting the Trash Where It Belongs

People watching was something he was good at. He was good at reading a situation, giving empathy to the right people, withholding it from others.

There were very pretty specimens in this bar, but each of them seemed to be getting their ruffles feathered by this one particular man. He just didn’t seem to get a clue.

Carl was grateful that he had never been so foolish.

He had been rejected before, of course, but he always took it graciously unlike this man who was making a fool of himself. It was so much of a train-wreck that Carl couldn’t help but watch with morbid curiosity.

Carl having watched this man the entire evening, knew that no one would miss him. He was screaming and patronizing people all evening especially women who clearly wanted nothing to do with him, and Carl decided he ought to do the world a favor and put him out of his misery. He rather disliked men who thought it was okay to harass women.

It made women less susceptible to Carl’s charm, and since his life depended on that, he wasn’t going to let any obstacles stand in his way. Especially not this obnoxious man.

No meant no, not try harder or scream at the person you thought you were entitled to but were not. Carl didn’t know why that was such a hard concept for some people to figure out.

Carl noticed the man leaving the pub completely intoxicated, aggravated that the tender wouldn’t serve him anymore. He watched him a few moments longer before leaving so as not to appear suspicious.

But no one ever suspected Carl of the terrible things he did. He never got caught, for one. For two, he was very handsome and could easily feign an innocence he hadn’t possessed for many moons.

They said the only beauty that mattered was the beauty of a person’s heart and soul, but Carl thought that was something only an ugly person would believe. After all, his handsome face was good at getting him out of trouble and his heart and soul were both blacker than coal or a night’s sky without moon or star.

The man wasn’t hard to find. He was stumbling forward like a sleep deprived five-year-old looking for a juice box in the middle of the night. He was mumbling incoherently beneath his breath about the women who had rejected him earlier in the evening and how he was far superior to them.

Carl’s lips curved into a jagged grin when the man decided to fumble through the alleyway. This suited his dark purpose just fine.

He generally preferred a chase where the victim knew he was following, hearing the sweet music of their terrified hearts made him exquisitely happy. He was a predator, after all. It was better when the prey knew they were prey because they always thought they could outwit and surprise him, somehow. Some got pretty far in defending themselves from their incoming doom. Others were laughably horrible.

Others like the specimen before him didn’t get a choice in the matter because he had already made up his mind. Carl watched the man scream at a garbage can and raised his brows.

Food was food, though. Regardless of what it wore or stunk of. Carl was a bit impressed that the man was actually standing, inebriated as he was.

It was then that the man finally had taken notice of him.

“It doesn’t much matter. Anyone who knew me when I was human is already dead and gone,” Carl shrugged. “The names of the undead forever change and no one ever takes notice.”

“What the hell? You must’ve had more to drink than me,” the man snickered, shaking his head. “You stay away from me! I’ll punch you.”

“Will you?” Carl challenged, raising a brow. “Seems it’s taking an awful amount of concentration for you simply to stand.”

“You bastard! What do you want? I don’t have no money.”

“Not interested in money. I require something a little more valuable.”

“What’s that?” The man demanded, eyes all but bulging out of his head in his annoyance.

“Only a mere trifle, dear moron.” Carl edged closer to the drunk. “Your life.”

“I told you I have no wife. If I did, I wouldn’t be here talking to you of all people! You freaking weirdo.”

Carl smirked. “I’m the weirdo, eh? At least I can read the room. You kept spilling your drinks on people who had no interest in looking at you, let alone speak to you.”

“The one that will put you out of your misery.”

“I find death is a very effective method in curing any ailment life may give.”

“You’re funny!” The drunk man slurred, waltzing in a line (far from straight) in Carl’s general direction. He jabbed a finger at Carl. “Got any other jokes, weirdo?”

“I do, but I think the biggest joke in this alleyway is you.”

The man’s eyes suddenly darkened as he tried to swing at Carl, only becoming angrier when Carl deftly stepped out of the way. “What’s the matter, can’t fight?” the man sneered. “Of course, you can’t, mama’s boy.”

Carl snorted. The assumptions mortals made were sometimes amusing. Mama’s boy? Well, he supposed he was what some humans would call a pretty boy, but Carl was about to show this man just how very ugly he could be.

“Come on, mama’s boy, you gonna defend yourself or what?”

Carl’s lips curled into a nefarious smirk, his fangs lowering over his eyeteeth. “I’m going to clean up this alleyway, so you don’t scare away all my potential victims.”

“Not human,” the man gasped.

“Took you long enough to grasp the concept,” Carl snickered. His dark eyes were now red in hue. “But unfortunately for you, it is also too late.”

“What are you the white knight defending ladies honor?”

“I could care less about that, but it’s men like you that make other mortals leery and less susceptible to my charm. A man’s got to eat, and I’m not going to lose any more opportunities because of bumbling nitwits like yourself,” Carl sneered, his handsome features transformed into something ugly. The more aggressive he became, the less handsome he appeared to mortals.

The man who had been aggressively jabbing him before had enough sense to back away from him now.

“I am the black night, the blackest. A night without moon or star, I will extinguish the light in your eyes, and I will relish doing so,” Carl stated, walking towards the man who was trying desperately to find a way to escape him.

Carl was amused. This fool wasn’t going to escape. They never could once Carl chose them.

The man eventually grew weary of trying to climb around and over trash bags, trash cans, and other debris found in the alleyway. But he kept going which was probably the only admirable quality Carl could find in him. Despite the fact that this man was a disgusting excuse of a human being, even he had the will to live.

But Carl supposed the same could be said of most insects. Perhaps, there was nothing admirable in this man, after all.

Carl creeped slowly up on the man, watching his every moment with eyes sharper than a hawk. Just when the man thought he was safe, Carl appeared behind him in a few short seconds to show him just how wrong he was.

The man’s heightened heartbeat was music to his undead ears.

He was saying something, but Carl couldn’t hear him. His ears usually picked up on sound quite easily, but his hunger was strong in this moment, and that was all the vampire could focus on. Lunging forward, his fangs bit deeply into the man’s throat, and Carl was pleasantly surprised that the man’s blood tasted so good. It was a bit disappointing when he stopped trashing beneath his grasp and the last ruby of blood had been extracted. It was just enough to slake his thirst, at the moment, but the vampire knew he needed another.

He looked at the body before him knowing he couldn’t just leave this man to be found. Using magic he transformed the man into a plastic bottle which he threw into the trash.

Trash belonged in trash cans, after all, the vampire thought with a malevolent smirk.

Linda M. Crate’s works have been published in numerous magazines and anthologies both online and in print. She is the author of six poetry chapbooks, the latest of which is: More Than Bone Music (Clare Songbirds Publishing House, March 2019). She’s also the author of the novel Phoenix Tears (Czykmate Books, June 2018). Recently she has published two full-length poetry collections Vampire Daughter (Dark Gatekeeper Gaming, February 2020) and The Sweetest Blood (Cyberwit, February 2020).

She can be found at: