Vinegar of the Plague 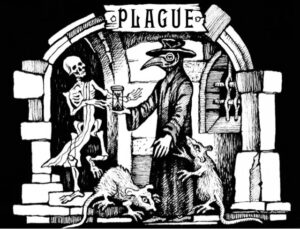 WARNING: The treatment discussed here is a superstitious treatment developed in treating bubonic plague victims. Using essential oils directly on your skin can result in allergic reactions or burns. This is merely a historical piece and does not make claims for the use or efficacy of any non-medical treatments. Any and all illnesses, symptoms of illnesses, and treatments must be discussed with your medical doctor.

In October of 1347, 12 ships from the Black Sea stopped at the Sicilian port of Messina. To their horror, most of the sailors were dead. Those still alive were gravely ill and their bodies were covered with black boils. This event marked the entrance of the Black Death, or the bubonic plague that killed millions across Europe.

The Black Death spread quickly, indiscriminately and it was not until the 19th century, hundreds of years later when scientists were able to fully understand the plague, what caused it and how it spread. Yersina pestis is the name of the bacillus that is spread. The bacillus can be spread from person to person by air. The bacillus can also be spread by the bite of infected fleas and rats, which were found in great numbers in Medieval Europe. 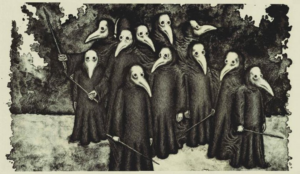 There were crude treatments put in place for treating the Black Death, which many called God’s punishment, divine discipline for sins such as greed and heresy. With that thought in mind, many communities believed the best method to rid them of the plague was to seek God’s acceptance, and in order to do this they needed to purge themselves of heretics. More on heretics later this week.

So, what were the treatments in the 1300’s for the plague? The treatments included bloodletting, and boil-lancing (which means popping the bubo, the pus-filled boils that covered victims bodies. This was dangerous as victims could go into shock, and the spray of blood and pus could infect others in the room).

Other less gruesome forms of treatment include superstitious practices, such as burning a special blend of herbs, or bathing in rosewater, or certain vinegars

The most popular superstitious vinegar oil used was Four Thieves Oil, which is still sold today and which anyone can make at home. Four Thieves Oil can be made by combining;

If you were going to use this as say an insect repellant, you would need to combine this mixture with water or a carrier oil.

Mix all ingredients in a glass bottle.

Must be diluted for use, so every 6-12 drop must be accompanied by an ounce of carrier oil.

The name Four Thieves Oil, or Four Thieves Vinegar, comes from one of two legends. In the first, a group of thieves was caught robbing the corpses of plague victims. For leniency, they promised to share their secret that allowed them not to get sick. In another possible origin, a group of thieves had already been caught stealing and their punishment was to bury plague victims. They created this oil in order for protection from the plague. It’s thought that these legends originated in either Marseille, or Toulouse. Sometimes you may hear of Four Thieves Oil referred to as Marseille Oil.