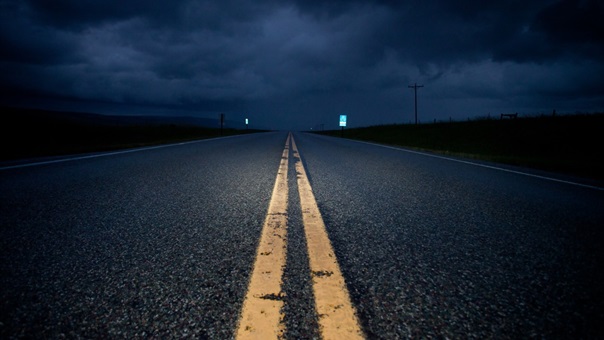 Do you ever worry you’ve been driving too long? Those road stripes can become hypnotic. Maybe they’re a sign of something.

Mary Edigo lives in rural New Hampshire where the deer peek in bathroom windows. She works for a direct mail company to pay the bills and her part time gigs include writing stories and pet sitting. She has previously won 2 writing contests in the now defunct local paper, and had an article published for the local community paper. Her real love is horror, so she reads, writes and watches a lot of it. She is currently doing final edits on her first novel, hoping to get it published soon, and in the middle of writing her second.

White stripes; yellow stripes – one on either side.  Sometimes they’re broken on the left, sometimes they’ve got grooves embedded in the pavement, sometimes they’re both white. Beyond the windows it is dark, lighted only as far as the headlights spread. I think there are trees on both sides, that’s what they look like anyway. The taillights of the truck ahead glow red in the darkness, hypnotically drawing me forward. I honestly don’t know how long I’ve been here, on this road to nowhere. It started out so simply.

I was driving to my parent’s lake house. I left really late, I had a lot of work to clean up so I could take this vacation. Exhausted, I dragged myself home to pack, then got into the car around 8 p.m. to make the two-hour trip. Timothy, my husband, and Julia, my daughter, had already gotten there earlier in the day, bringing most of what we’d need for two weeks of blissful family time. I couldn’t wait to see them, although Julia would most likely be sleeping. Maybe Tim and me would be able to start the vacation with a “bang.”

Part of the trip was a boring two-lane highway that lasts about an hour of the trip.  I knew that would be the hardest for me to get through, I would have to find a way to keep myself awake. It was dark, so there was nothing to see out the windows. The radio was playing, but I really wasn’t interested. I rested my right wrist on the steering wheel and stared out in the darkness ahead, yawning, keeping the car between the lines at a steady 65 mph, following my headlights.

My first inclination that something wasn’t right was when I realized I hadn’t seen any road signs in a while. Glancing at the clock, I saw that I should have been almost at the end of this excruciating highway part of the trip, but I hadn’t seen the sign that announced my exit. I sat up straighter in my seat. Maybe I had missed it.

As the minutes past with no signs, a ball of panic rose in my gut. Now that I was paying attention, I realized that there were no exits either. I had seen some other cars, some passing me going the other way, and some ahead and behind me, so I knew I wasn’t alone.  There was an 18-wheeler in front of me that I had been following for quite a while.  So long in fact, that I had memorized the license plate – AH48200 – and the company logo and slogan. I was tempted to call the 1-800 number for the “how’s my driving” sticker, just to see if the driver was as freaked out as me, but I knew that those numbers go to an automated  machine.

I grabbed my cell out of my bag on the seat beside me and autodialed my husband’s cell. I knew that talking on a cell phone while driving was illegal in this state, but I would have been so happy to get a ticket right then, happy to even see a state trooper that I would have paid double the fine and happily spent a weekend in jail. That panic ball was working its way upward. I had a feeling that if it got to my mouth it would erupt in a scream that I would never recover from.

Tim’s cell never rang. The phone did nothing. I took a quick peek at the screen to find there were no bars at all.  Frowning, I threw it on the passenger seat. I usually had all bars on this highway. The ball slid further up my throat. I decided to pull off to the side of the road, maybe get my panic under control.

When I tried to turn the wheel, I couldn’t. It wouldn’t budge. It was locked into invisible tracks like a train. I experimentally took my hands off the wheel. The car stayed on track, perfectly between the lines.  My hands started to shake. I tried to shift into neutral, but the gearshift was frozen on D. Panic was in full force now, and I blindly decided to jump from the car, even though I knew it was suicide. But I never got the chance. The door wouldn’t open. It was frozen like everything else. I heard a whining sound and realized that it was coming from my own throat, the sound of a panicked animal. After a while of this whining, my rational mind reasserted itself, and I gave it up.

That was a while ago. I can’t count days, hours or minutes – I have no sun and no moon. No clock or watch, both frozen at 11:23, or phone, which I let die because it was useless. I have no idea how long I’ve been here. The truck disappeared and was replaced by other vehicles, an SUV, a high-class limo, a bus, to list a few. Behind me headlights follow for a while, then disappear and are replaced by different ones. I wonder where they go, and why I’m still here. It crossed my mind that I might be dead, my hell to suffer on this highway to nowhere, but that feels wrong. For one thing, dead people don’t need sustenance – but my handy water bottle in the center console never empties and there is always a pack of crackers in my bag on the passenger seat. And I sleep, but it is far from refreshing.

The dreams are the worst. I dream as if I live. I touch, taste, feel with my family and my co-workers.  Friends say funny things and I laugh. I read internet news stories on my breaks from work. I make love to my husband and make pancakes with my daughter. I try to sleep more, but it doesn’t always come. I’ve read the book in my bag a million times. When I roll down the window the air doesn’t rush in, but I can smell a hint of sweet night time jasmine.  Mostly I think, and only one question keeps popping up. Where am I going?