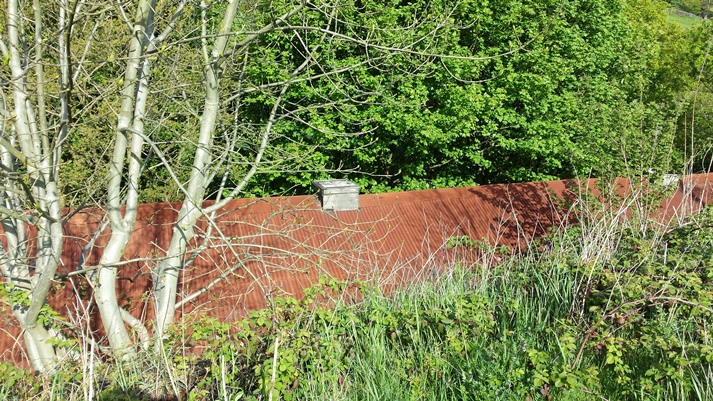 There are corners where secrets linger and hide, warehouses are those types of places.

Sam JT Butterworth is a writer who likes to observe the everyday and interpret it in a less than wholesome way. Often it is less than wholesome to begin with. He lives in the country town of Holmfirth in northern England, where he’s labouring over his first novel. For more on Sam, please visit http://www.utter—tosh.blogspot.co.uk/ or http://www.blog.gothicangelclothing.co.uk/

The Warehouse in the Trees

I thought the homeless people had disappeared because of the rain. It was a small town but there were always tramps because of the tourists. They were familiar faces. It made sense to me that they would seek shelter in weather like that – six straight weeks of grey gloom and merciless rain that swelled from drains and bounced off pavements. The hillside road outside my cottage flowed like a river and the world seemed grim and forbidding.

But then one morning it was over. Sunlight filtered through white bedroom curtains and outside all was gold, blue and green. I opened the window and heard birds cheeping and felt a gentle warmth rush in with the fresh clean air. I dressed and went outside.

I let my feet lead me, first turning right outside my house and then right again 100 yards up the road, onto a dirt track that ran through fields and trees to a cluster of houses a mile away. The sunlight felt nourishing on my face and neck and on my pale freckled forearms. After a few hundred yards I stopped and reached into my back pocket. I pulled out a crumpled cigarette pack. There was one left. I lit it with my battered chrome Zippo and tasted petrol on the first drag. I flipped the lighter closed on my outer thigh and put it away. I looked around.

The puddled brown mud and grey gravel track was deserted behind and in front. To my left was a ploughed field and beyond it a farmhouse, and then the main road. To my right was a thick copse of lean young trees. Beyond that were larger, older, crooked trees that climbed the hill up out of the valley, until it reached a plateau where there were more houses and another small road. I could hear the swollen river rumbling through the base of the valley. My eyes drew back to the canopy of young trees, from which I could now clearly see protruding a rust red corrugated metal roof. A wooden telegraph pole reached higher still from in front of the structure, which was stark and incongruous in its healthy, verdant surroundings, and I felt uneasy as I took in the large warehouse in the trees. I’d walked down this lane maybe a dozen times since moving in but this was the first time I saw it.

Two chimneys were spaced equally along the spine of the roof, both boarded up crudely with planks of wood. But…isn’t that smoke seeping out? I asked myself. I held my cigarette at arm’s length behind me to check if that was the smoke I’d seen, but a swirling breeze made it impossible to keep the smoke entirely out of view. I felt a nervous ripple in my stomach but put it down to hunger and edged down the slope from the track in the direction of the warehouse.

As I got to the ground level of the warehouse I could no longer see it. The trees were evidently large and leafy enough to obscure it and I felt small and isolated. I moved through brambles that snagged on my jeans and long grass that soaked my trainers. There was a rich, thick smell of pollen hanging in the air, along with small black flies that seemed to hover constantly a foot above my head. In some of the branches large cobwebs glistened with crystals of morning dew.

Although the undergrowth was thick I could see a path of sorts that had been carved in it. A narrow groove ran through the grass and brambles from somewhere further back in the trees, towards where I thought the warehouse must be. I joined it, wondering who had made it, and why. It seemed quite well trodden. It occurred that it must have been used quite recently, as the plant life would have been growing quickly with all the rain. But maybe I was wrong.

I looked around the dense foliage and saw signs of human life. Empty plastic bottles, tin cans, wine bottles and plastic bags were scattered in the wet grass. In one almost sheltered spot a couple of tractor tyres were laid out like stools and there was more debris beside them.

I stung my hand on a bush of nettles, swore out loud and dropped my cigarette. It went out immediately but I stamped on it out of habit, hitting something solid with my heel beneath the surface grass. I kicked tentatively with my toe and revealed a dirty set of silver handcuffs. One of the cuffs was twisted and bent. Kinky couple in the woods?

I edged through another 15 yards of nature and suddenly stood in front of the warehouse. It was around 30 feet across and 20 feet high at the peak of the roof. A doorway sat in the centre with a roll-up metal door, raised open a couple of feet.

I bent down and peered into the heavy, promising darkness. I thought I could smell stale smoke, but saw nothing coming from the doorway. I shuddered and stood back up, taking a step backwards. I looked at the world around me. The morning was peaceful. Birds chirped, a fat bee buzzed past and the gentle breeze sounded like soft waves as it brushed through the trees in the valley bottom. It was a beautiful day outside. There was nothing more I could want from it, nothing to gain – but I did want more. I had to have more. I had to go inside the warehouse. I crouched again, brought my fingers underneath the rusting metal door and lifted.

The door flew up much faster than I expected and clanged loudly as it opened fully. I stood and stepped back again. The building now gaped at me; a humourless, eyeless robot face, mouth wide open. I went inside.

I took a few paces, feeling with my feet as I waited, hoping my eyes would adapt to the thick darkness. But they were still swimming in sunlight and all I saw were hallucinations of yellow light in the deep blackness. The floor felt like concrete and it seemed level enough for me to trust my footing. It was cold. I walked slowly, arms outstretched, expecting to touch something at any moment. Perhaps it was just an empty space, I thought. Maybe it had been abandoned years ago. But then I noticed the smell of smoke again. It grew stronger the deeper I walked into the darkness. I felt it burning my nostrils and it seemed to be getting warmer.

I spun around, thinking I might have heard something behind me, but all I could see was the open warehouse door, a rectangle of yellow and green. I can leave whenever I like, I reassured myself.  I turned back around and walked on in the direction of the back of the warehouse. The curiosity was irresistible; I was being drawn in, despite growing doubts that I felt in my bowels and in the prickling of hairs on my arms.

After an amount of time I couldn’t quantify I saw a faint orange glow in the distant gloom. It seemed far off and was very dull, but it was there. I followed it, walking more quickly, now and then looking back to the safety of the open door. But every time I did my vision failed again against the darkness and it took moments to focus on the orange light. I decided to concentrate on that and moved forward with purpose, the smoke growing perceptibly thicker with every few feet covered, now acrid and metallic in my mouth. It was getting quickly warmer too. As I grew closer I saw that the orange light shone from a large, dark object. It was a furnace. A large furnace with the door almost closed, the fire within casting the orange light. It was a huge device and the square, riveted door alone was four feet across. Above it a thick pipe reached to the roof, to one of the boarded up chimneys, and I could see in the dull light that most of the smoke was billowing and pouring back into the warehouse. The glow also showed silhouettes of thick chains hanging down from metal beams about 10 feet off to the left of the oven.

Heat flooded from the gap in the door and I quickly moved around the other side of the furnace to escape it. As I did I tripped on something and fell against a mound of some kind. I jumped to my feet but couldn’t see what it was as the orange glow shone only away from me. All I could see was a postage stamp of light back at the entrance. My lighter, I remembered.

I took it from my pocket and lit it, holding it out with a shaking arm. Shoes. I’d fallen into a pile of shoes. A pile of shoes that was taller than me. Fear gripped me and held me rigid as I stared. I thought immediately of a documentary I’d seen about Auschwitz. The pile was made up of hundreds of pairs of dirty old boots, trainers, wellingtons, flip flops… And suddenly I knew where all the homeless people had gone. This was a graveyard. Worse, it was a trophy pile. The shoes could have gone in the furnace, but they sat ownerless in that grotesque pile. I looked towards the oven. What’s cooking?

I stepped towards the furnace, then froze as I looked past it to the warehouse door. The small rectangle of light was now filled with an unmoving black figure. It was impossible to tell whether they were outside, or in. Then the figure moved, I heard the distant clang of moving metal, and inch by inch, the door rolled closed.