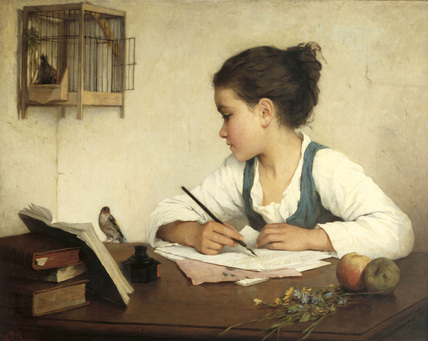 Our written words leave stronger imprints than we may think. Perhaps they can leave others a clue.

Regan Keeter has been writing professionally for more than eleven years, during which time he has worked as both an author and a journalist. He is a member of the Chicago Writers Association and recently had short stories published in the Chicagoland Journal, Wordhaus, and Dark Dreams. Additionally, he scripted a short film that was released in 2003 and, in 2006, received a grant from the DeKalb Council for the Arts to author a series of stories for children. regankeeter.com

Elisa Elstien’s journal was submitted into evidence three days ago. It reads as follows:

breathing. My daddy doesn’t believe he’s there. My mommy hasn’t seen him. I don’t think she

thinks he’s there, either.

I tried to get my mommy to squint and tilt her head like I do when I want to see him. She tried for a second, but I think she only saw my flower dresses and silk shirts.

I don’t think she saw the man’s sunken cheeks or sunken blue eyes.

After she left the room, I squinted my eyes and tilted my head like I showed her, and I

could see his chapped lips part into a smile, exposing his crooked, yellow teeth.

I think, sometimes, he means to kill me.

I can hear him scratching on the inside of the door all night, but my parents won’t let me sleep with them anymore. They say I’m ten and I need to learn to sleep in my own. But I just lie in bed at night, my covers pulled to my chin, until I can no longer stay awake.

Well, Mommy’s calling me to dinner. Pray for me, dear Diary.

She has not yet been found.