In The Back Row

The afternoon had been hot, even for July.

The sun had set around eight, but Rudolf had already risen. These short summer nights always made him impatient. So much of the day spent cooped up…so little time to go out.

He’d been meaning to see Ghostbusters for the last week, but he’d wanted to wait for the crowds to die down a bit. Being surrounded by humans inside a darkened theater was almost too much for him. Their hot exhalations – flavored by the sweet and salty foods they’d inevitably be consuming – aroused his appetite; their constant guzzling of sweet drinks incited his own thirst, but within the confined space of an auditorium he didn’t dare indulge his urges. There were too many people, and too few escape routes should he be caught feeding. A similar thing had happened to him at a ballet in Sarajevo in 1911, and he’d barely escaped the mob.

There was an energy on Main Street tonight, despite it being a Monday. Rudolf deftly navigated a path between teenage couples, slow-moving senior citizens, and families with wandering children as he made his way down the sidewalk to the Riviera Theatre. He’d been smitten by this small town the moment he’d arrived on the Greyhound two months before; with its old dam and mom-and-pop shops, its summer camps for kids and its highway bars filled with tough men. Before Three Rivers he’d been in Ozark, Arkansas—and before that Coos Bay, Oregon. Rudolf liked small towns. He’d have to be moving on soon, of course. That was the pity. His appetite was not great, but over a period of months even these rural municipalities would start wondering about the growing number of missing persons, and that was when he knew it was time to move on.

The Riviera was old and Rudolf appreciated old things: rusted nails, ancient washboards, tarnished children’s toys, and especially run-down theatres. He enjoyed the patina age gave to ordinary objects. The Japanese called it Wabi-Sabi: the embrace of transience and imperfection. As he passed beneath the blinking rows of incandescent lights that framed the marquee, Rudolf listened to the clacking sound his cowboy boots made on the old porcelain tiles. Nobody used porcelain for floors anymore. Everything new was plastic and concrete and shiny and lifeless. Of course he knew why he was so drawn to things that showed age—it was because he himself never would.

The young girl who sold him his ticket had a round face but a slender torso. He thought she was beautiful in her man’s tuxedo vest and tie. He made his way inside where a tall freckled boy tore his ticket, and gestured him towards the auditorium. He skipped the snack bar. He’d eat later.

There were very few people in the theater proper. Rudolf found a seat in the rear, as was his custom. He liked watching movies, of course; but he also enjoyed watching people watch movies, and the back of the auditorium offered the best perspective. He was early, and contented himself with studying the dozen-or-so people who entered after him as they chose their seats with utmost care. Rudolf had been an unabashed film buff since first seeing La Sortie de l’Usine Lumière à Lyon at the Grand Café in 1895, and that moment and this one seemed to him connected in every way, and none.

The lights dimmed, and the coming attractions trailers began. Rudolf always enjoyed the anticipation of seeing what was to come. It was like sorcery. He’d seen people burned alive for daring to foretell future events. He’d seen them stoned for public displays of affection that were commonplace here in Three Rivers. He’d seen them imprisoned for wearing clothing that would now be considered prudish. Each human was a modern miracle driven by primal impulses they would likely never fully understand. They all feared the same things, but gave those things different names. They loved and they hated, but never understood how similar those two feelings were.

All of them, however, wanted to laugh.

The lights went down, and Ghostbusters began playing.

Rudolf exited the theater two hours later convinced he’d seen a once-in-a-generation masterpiece. The film had a unique concept, brilliant direction, inspired performances by all the actors, and a perfect balance of high-and-lowbrow comedy. He’d seen Duck Soup at the Roxy in 1933 and he’d seen Blazing Saddles at Grauman’s Chinese in 1974- and what he’d just watched measured up to those experiences in every way. He’d laughed and howled along with everyone else in the theater at Bill Murray’s bone-dry delivery, Dan Aykroyd’s bumbling slapstick, and Harold Ramis’ sardonic wit…but for some reason it was the little fellow- Rick Moranis – who had absolutely killed him. He’d only been vaguely aware of this ‘nerd’ phenomenon that seemed to be obsessing popular American culture of late, but the flawless comedy of Moranis’ clown character – and the movie as a whole – had done what Rudolf had thought impossible: for a little while, he had forgotten he was a creature apart. He’d shared the evening with a roomful of strangers and for the first time in centuries – since that fateful day in the caves north of Bistrița, he’d been one of them.

It was quieter now as he wandered back down Main Street towards the St. Joseph River. He considered how the people in the theater had screamed when they saw the film’s first ghost in the library basement, and later on laughed at the little obese green one. He mused how humans had invented so many ways of dealing with the things they would never comprehend, yet knew lurked around them at all times. The shadow in the basement. The whisperer in the forest. The bloodsucker in the back of the theater.

There were still several hours before dawn. Rudolf decided he’d go sit by the dam and watch the slow-moving river flow by for a while. He was in no hurry. He had all the time in the world. 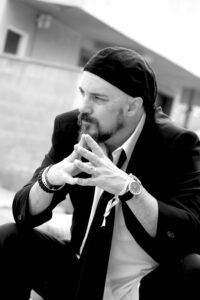 Jim Towns is a writer, director and artist. His films include the silent expressionist feature Prometheus Triumphant: a Fugue in the Key of Flesh, the necromantic dark comedy STIFF, the award-winning haunted heist film House of Bad, and the post-apocalyptic drama State of Desolation. He’s currently in production for the upcoming streaming series Immortal Hands.

His published short fiction includes “Warlock’s Eye” (FunDead Publications), “Fools at the Feet of a Hanged Man” (Dodging the Rain literary magazine), “Castrato” (Things in the Well), “The Grave” (Hellbound Books) and “Bad Coffee and the Bomb” (Switchblade Magazine). 2020 saw the publication of his debut nonfiction book, American Cryptic.

His paintings and mixed media artwork have been exhibited in galleries in Pittsburgh, New York and Los Angeles.

He currently lives in San Pedro, CA with his wife and two mysterious cats.