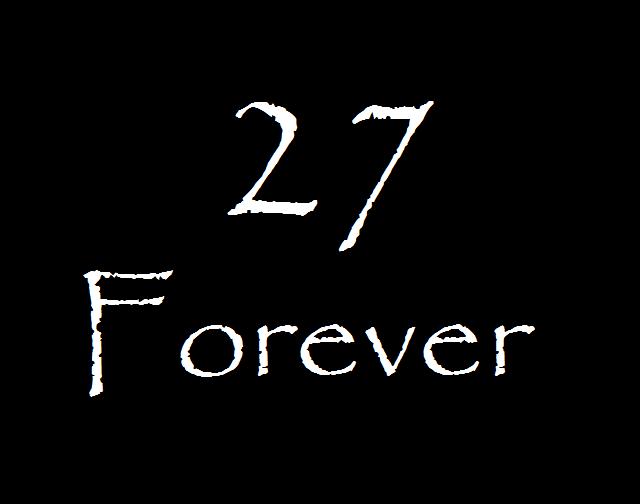 This morning it felt like a sad day even before the day truly began. Outside the ground was moist from the previous nights powerful storms. There was a stillness that whispered news was coming and it did. Undertaker called out to me and said “Amy Winehouse has died.” Then he retreated back indoors.

I quickly looked up whatever details I could find and as the news had just broke there were very few details indeed except for one striking note. Winehouse had died at the age of 27. I realized that she had now joined the Forever 27 Club.

I live in a funeral home and so I live with death. I know that the end leaves a punctuation that cannot be removed. Whether by coincidence or calculation Winehouse had joined Robert Johnson, Brian Jones, Jimi Hendrix, Janis Joplin, Jim Morrison, Pete Ham, Kurt Cobain and many brilliant musicians that never saw their 28th birthday.

Janis Joplin once said that “People, whether they know it or not, like their blues singers miserable. Maybe my audience can enjoy my music more if they think I’m destroying myself.” In thinking about Joplin’s words I do understand what she meant. Many of us like knowing that our musicians feel as we do and sometimes we feel sad, very sad.

I enjoyed the music of Winehouse and many of these artists who died very young. Many died due to misadventures, excess, and sometimes even tragically like punk singer Mia Zapata who was murdered in 1993.

We are slightly superstitious around these parts as we come into contact with a lot of people and are exposed to many of their customs and belief systems. We may not necessarily accept all of these superstitious notions but we do respect that people have their own values. Many years ago a woman was entombed here with a series of numbers engraved across her tomb. It was later learned that she was a believer in numerology. Numerology is a practice of believing there is a relationship between counts and measurements. Numerology is associated with the paranormal, astrology and divination.  It is believed that Chaldean Numerology, a specific path in the practice, came into existence about 2,000 BC. It was created by the Babylonians, used by the Greeks, and later used in India.

There are two supreme numbers in Chaldean Numerology – the first being 23 and then 27. It is believed that 27 is particularly more spiritual. It is also believed that this number has the power to break ones wheel of life and death.

Now, it is not the age of these artists that caused their death. What is most similar about these artists is that they were all on a very similar path in terms of their career and life as they dealt with artistic pressures and the stress of fame.

Those musicians on this list may have died but their celebrated music will remain with us.