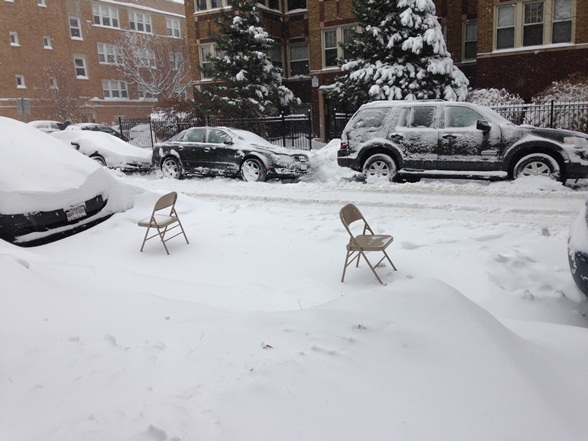 Winter seems so long ago but its wicked ways are not forgotten. Read “Dibs” by Kurt C. Schuett

Upon graduating from high school, Kurt Schuett won the Gwendolyn Brooks Award for Poetry in 1993; this honor, coupled with professional publication in The American Goat literary anthology in 1993 with “The First Time” and Harmony literary magazine, where he won the esteemed Guy Cooper Poetry award for “Tree House Blues,” all fueled the realization that Kurt could and should write, dabbling in everything from poetry and short works of fiction to professional essays and lengthier works of fiction during and after his college years.  He completed his undergraduate in English at Culver-Stockton College before tackling a Masters of Education at Graceland University.  Currently, he is entering his eighteenth year as an educator, formerly as a German instructor and presently as a high school English teacher, working in the suburbs of Chicago.  He lives in the northern suburb of Libertyville, Illinois.

Kurt recently published a Southern Gothic ghost story titled “Calamity James” in the Belle Reve Literary Journal, a work that was nominated for the Pushcart Prize.  In addition, two of his poems, “A Response to Charles Bukowski: Yes I’m Drinking Today” and “The Bohemian Waitress” were featured in the 69th edition of the Burningword Literary Journal.  Kurt’s short story “The Last Supper Redux” will be the top-slot in an upcoming anthology launching this fall, highlighting local Chicago horror writers.

Insurgency is Kurt Schuett’s debut novel, a speculative work of fiction that encompasses elements of urban suspense, thriller, and horror.  This novel will be released by Bad Day Books, an imprint of Assent Publishing, August 2nd in print and all e-book platforms.

For more on Kurt visit:

“Okay, honey.  I really need to get going.  It’s snowing like a bear outside.  If you need anything, be sure and call,” Tony said, exiting his three flat off Clark Street in the northern section of Chicago, known to most as Boystown.  Tony was a teacher, and he had a first period class that started at 7:30 sharp.  And since he’d been late on other occasions, primarily due to his wife, he couldn’t afford another letter in his file.  If so, his bid at tenure would undoubtedly be denied.

His wife’s ailment required a ground-floor residence, not a garden unit.  And to be honest, they were lucky to swing the pad they currently had.  The apartment had walk-in access, and all of the doorways inside the residence were widened.  The one thing it did lack, though, was parking.  Hence, Tony, like so many Chicagoans, had to settle with street parking.

So the cost of the aforesaid while living on one teacher’s salary, especially since his wife’s disability check was barely enough to make the car and insurance payment, made for a tight race at the end of every month.  Candy would spend the rest of her life in a wheelchair, her paraplegia caused by a hit-and-run from a black sedan just a few blocks away from where they currently resided.  The police speculated that the driver was probably drunk.  Tony was always the first to remind his students that life can be hard and dangerous.

Tony’s first reaction to the shitty nightmare of whiteness, his self-created acronym for snow, was damn.  It was deeper and icier than he had imagined, the white slush kissing the upper rims on the tires of his Hyundai.  This only meant one thing; Tony would have to pull the portable air conditioning unit from out of his trunk.  They had central air in their current apartment, so they didn’t even need a portable one.  And ironically, this particular unit hadn’t worked for years, but Tony used it for something entirely different.

He took his shovel out of the car’s trunk, and hurriedly cleared an exit route from his parking place, ghostly vapors of steam escaping his mouth like carbon dioxide from a tailpipe.  Finishing in record time, Tony crept out of his parking spot, just far enough, before putting the white sedan back into park and throwing the hazards.  He exited his vehicle, walked to the rear, and popped open his trunk.  With a quick bend and snap, Tony withdrew the air conditioning unit and placed it into the middle of his former parking spot before jumping back into his car.  He hadn’t gone far, only about two blocks, because the visibility was poor and the driving slow, and then he remembered something.  Hanging off the edge of his laptop bag was an empty carabineer, which prompted Tony to say out loud to himself, “Damn it, my school keys.”

Tony rushed back to his apartment off Clark Street only to find a black sedan pulling into his spot, the air conditioning unit tossed up onto the curb.  Tony was flabbergasted, and he was late.  Tony’s anger was apparent in his voice as he rolled down his window and shouted as the perpetrator was just stepping out of his vehicle, “Hey, I cleaned that spot and saved it with my AC unit!  I have dibs, so you’re going to have to move!”

At this, Tony found himself flying out of his car, slip-sliding his way over to the owner of the black Ford, his finger ferociously wagging at him as he neared.

“I don’t think you understand me.  I was parked here, and I cleaned this place off, and I saved it with my AC unit.  You’re going to have to find another spot.  I need this spot!” Tony was close enough to smell the alcohol on the man’s breath and see the lack of clarity in his eyes.

“Back off, you fuck!” the man said, shoving Tony in the chest.

Tony wasn’t a violent man, but life had dealt him one too many raw deals.  Tony regained his footing just as the familiar rumble of metal tonnage sounded around the corner, the fire-orange circulating lights casting fingertips of brightness off the snow-covered buildings as it made its way closer.  It didn’t take long for Tony to make up his mind because fate has its way of making your mind up for you.  He pushed the parking spot thief with both hands, causing the man to fall head-over-heels into the middle of the street just as the blade of the oncoming snow plow met his head with a concussive thud.  The drunk was seemingly unnoticed as the snowblade scraped the man down the length of the entire street.

Tony rushed inside to grab his school keys; he kissed Candy on the cheek and ran back outside to his car.  Tony picked up his air conditioner and returned it to his trunk; then he drove to school.  For the first time in a long while, Tony was eager to teach first period.