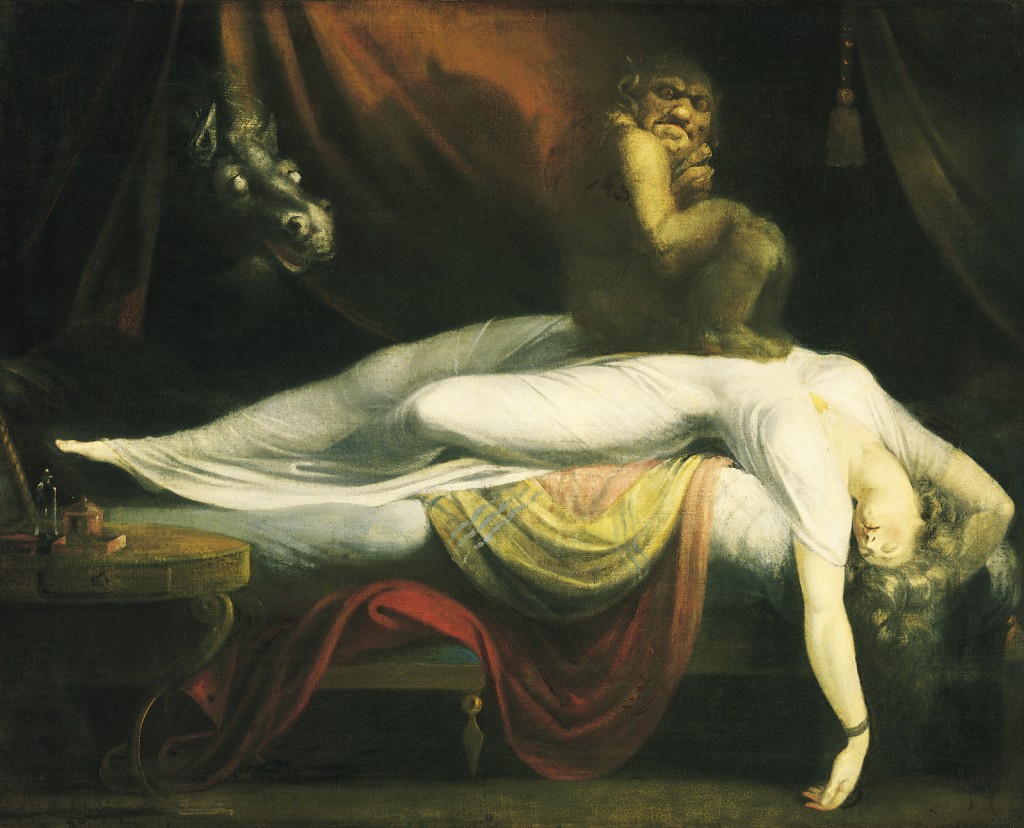 An interesting shift in my life has occurred – my dreams have been strange as of late. Really, I have been having terrible nightmares.

Nightmares are disruptive dreams that cause intense feelings of sadness, fear, anxiety, dread, and horror. There are people who suffer from recurrent nightmares, and these can sometimes be tied into post-traumatic stress disorder, where individuals play back an event or pattern nightly.  Nightmares are not very common in children under 5, but they are common in younger children, and most common in teenagers. Adults can also experience them, and some do on a weekly basis.

I read that nightmares can be caused by a variety of stresses, physical discomfort, and of course anxiety and stress. Eating before bedtime, which can increase metabolism and thus brain activity, can also stir nightmares.

Work related stress, I believe, have contributed to an increase in nightmarish activity in my night time world. Recently, in my dreams, I have found myself among cannibals, suspicious authoritative individuals in positions of power attempting to obtain some type of knowledge from me, as well as blank scenes void of hope and happiness, as well as gruesome scenes full of despair and terror. Sometimes I manage to wake up from these nightmares, while other times I am stuck, trapped to delve further into sad and fearful scenarios.

Last night I was able to wake myself from a nightmare, but then something terrible happened. I just laid there in an awful state of fear, unable to move, barely able to breath, and worst of all unable to scream. I was paralyzed for some minutes, feeling only an intense pressure upon my chest. When I finally broke free of this spell I sat up in my bed and screamed, and screamed. After some moments the Undertaker opened my door, and he looked rather displeased.

Standing there, by the door, in his black robe, black pajama pants and black pajama shirt, he showed very little emotion or urgency as he flicked on the light switch.

“If you’re going to start having night terrors on a regular basis Gravedigger I ask that you perhaps consider sleeping outside.”

Before I could answer he closed the door.

I was not having a night terror. Night terrors, sleep terrors, or pavor nocturnus, occur mostly in children between the ages of 2 and 12, but they can occur in adults. What is most frightening about night terrors is that the person experiencing them is usually said to bolt upright from their sleep, with eyes wide open, and with a panicked expression. The individual screams and is often inconsolable for a few moments. They can be confused, unaware of their surroundings, and the identities of the people (even closest loved ones) trying to wake them up. When they wake from it they typically have no recollection of experiencing the episode.

Yet, again, I was not having a night terror. What I was experiencing was a hag. Modern science today is said to have explained old reports of hags. They now call this phenomena sleep paralysis. Yet, years, and years ago people believed that when they were having nightmares it was caused by a hag. The hag was thought to sit on the sleepers chest and send them nightmares. Some people have reported that they have actually awakened to see an old, wicked looking woman sitting on their chest. There are even reports of some people claiming to have been stalked by a hag all their life. Even stranger, there have been reports of people claiming a family member was killed by a hag that would not leave their loved one alone.

There are varieties of hags such as hag’s that appear in folklore and frightening children’s stories, such as Hansel and Gretel. Nightmare hags are believed to be from the Old English mæra, a supernatural being with ancient Germanic roots. The mæra, or mara, or mare, is the Scandanavian version of this being. There have been accounts of mare’s in Norse tales as far back as the 13th century. It is believed that the belief in these beings goes even further back in history.

It is getting late now my friends and I have much, much work to attend to in the graveyard tomorrow. I must prepare for bed time and I only hope that my dreams are not disturbed by nightmares or fears, or worst, by that old hag.