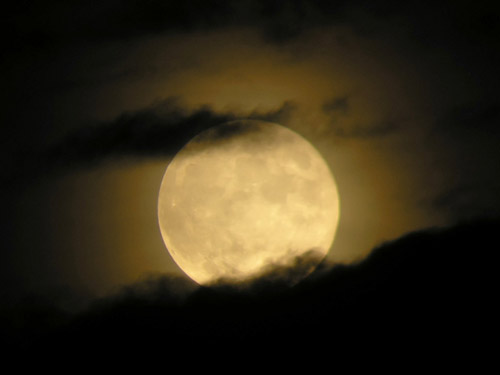 My birthday was Friday and I note it mostly for pity as I am getting older. Another year passes and I enter another year with hopes, aspirations, and goals – all the while continuing to elude death. Friday evening, the Undertaker wanting to do something appropriate for my day of birth, chose to take me on a ghost tour of our fair city.  This was quite a treat considering the Undertaker rarely likes to venture away from his work. Still, we arrived at the location and I was surprised to find my brother there, as well as some other family members to enjoy the haunted histories and terror of our town. Yes, my friends, the Gravedigger does have siblings and family. They are quite interesting, but I guess people who do not work in cemeteries and graveyards are expected to be…odd folk.

At one point during the tour, my brother said to me “There’s a full moon out. Perfect for your birthday.”

I quickly corrected him. “It looks almost full, but it is not. We are in a waxing gibbous moon.” He rolled his eyes and grumbled that he didn’t know “what gibbous means.” Gibbous, from the old Latin word gibbus, means “hump” and refers to the hump shape that the moon appears to have during this phase.

The September full moon, the Harvest Moon, rises this Sunday. My real name means “one of the moon,” and so I have always been fascinated with the moon and its phases, while always being somewhat afraid of the Lunar Effect, a claim by some that states people’s behavior changes during a full moon. There is very little hard, scientific evidence to confirm proof of the Lunar Effect, sometimes referred to as the Transylvanian Hypothesis. Folklore and pseudoscientific evidence has tried for years to prove that there is a rise in deviant human behavior during this time. Insomnia, insanity, or “lunacy” and other magical phenomena (lycanthropy) are thought to rise during a full moon. Countless scientific studies have disproven a connection between the full moon and an increase in strange behavior during this time. Yet, why do we still believe that extraordinary things are possible when the moon is full and bright against the nighttime sky?

Regardless of what you believe, Sunday’s full moon will remain low in the sky for a few nights, bringing light to our dark. If you feel a bit more animated, a little more jumpy, or hear the howling of a dog, or maybe even a wolf, do not fear…because it’s not like there’s proof of the moons magical power…or is there?

More on the full moon soon…