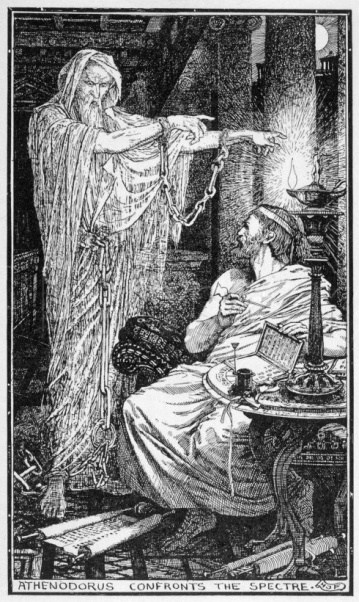 Many cultures believe in life after death. Many funeral rites we have seen here are done so with the belief that the deceased will carry on, in some form, preferably in some place that is peaceful.

Living in a funeral home, and working in a cemetery, you tend to see many, many curious things, but the question I hear all too often is “Have you ever seen a ghost?” Typically, I smile and give a vague response such as “This is a cemetery. What do you think?”

Now, I like to be vague because you never know what people are going to believe. I do find the belief in ghosts intriguing. I am also fascinated with the wealth of research that has gone into supporting ghost sightings. One must consider that the belief in ghosts predates written record, and ultimately the debate of whether or not ghosts exist is as old as human history.

Greek philosopher Plato (424/423 BC–348/347 BC) believed that the soul was a pre-existing entity. Therefore, its survival was not dependent on having a body. Plato made a distinction between a soul and an apparition – believing that an apparition was a soul that was weighted down by bodily impurities, impurities taken on while the soul was in the body. Now, he believed that apparitions were able to be seen by the living because of these impurities. Thus, he believed an “apparition” was a ghost.

Another philosopher, and one of the most educated of his time, Plutarch (46-120 AD), was a believer in the supernatural. He went on to argue in the existence of ghosts, stating that even the educated, and great minds from even his past, had given strong reports of encounters.

Pliny the Younger (61–112 AD), a lawyer, author and magistrate of Ancient Rome, had also given accounts of ghosts in his letters:

“What particularly inclines me to give credit to their existence is a story which I heard of Curtius Rufus. When he was in low circumstances, and unknown in the world, he attended the newly made governor of Africa into that province. One afternoon as he was walking in the public portico he was extremely daunted with the figure of a woman which appeared to him, of a size and beauty more than human. She told him she was the tutelar Genius that presided over Africa, and was come to inform him of the future events of his life: that he should go back to Rome, where he should hold office, and return to that province invested with the proconsular dignity, and there should die. Every circumstance of this prophecy was actually accomplished…”

Pliny the Younger, in his letters, also went on to give one of the earliest accounts of a haunted house that involved Athenodorus Cananites (74 BC – 7 AD):

“It happened that Athenodorus, the philosopher, came to Athens at this time, and reading the bill [of the house] ascertained the price. The extraordinary cheapness raised his suspicion; nevertheless, when he heard the whole story, he was so far from being discouraged, that he was more strongly inclined to hire it, and, in short, actually did so. When it grew towards evening, he ordered a couch to be prepared for him in the fore part of the house, and after calling for a light, together with his pen and tablets, he directed all his people to retire within. But that his mind might not, for want of employment, be open to the vain terrors of imaginary noises and apparitions, he applied himself to writing with all his faculties. The first part of the night passed with usual silence. Then began the clanking of iron fetters; however, he neither lifted up his eyes, nor laid down his pen, but closed his ears by concentrating his attention. The noise increased and advanced nearer, till it seemed at the door, and at last in the chamber. He looked round and saw the apparition exactly as it had been described to him: it stood before him, beckoning with the finger. Athenodorus made a sign with his hand that it should wait a little, and bent again to his writing, but the ghost rattling its chains over his head as he wrote, he looked round and saw it beckoning as before. Upon this he immediately took up his lamp and followed it. The ghost slowly stalked along, as if encumbered with its chains; and having turned into the courtyard of the house, suddenly vanished. Athenodorus being thus deserted, marked the spot with a handful of grass and leaves. The next day he went to the magistrates, and advised them to order that spot to be dug up. There they found bones commingled and intertwined with chains; for the body had mouldered away by long lying in the ground, leaving them bare, and corroded by the fetters. The bones were collected, and buried at the public expense; and after the ghost was thus duly laid the house was haunted no more.”

From ancient times to today, people have given accounts of ghosts stories, as well as the argument for the belief in the existence of ghosts. I find these reports curious and so will continue digging into historic accounts of ghosts and apparitions to share them with you. Ultimately, it does not matter what I believe. Ghost stories abound. For generations philosophers, the educated, and common every day people have shared their ghostly encounters with one another. Ultimately, it’s fascinating that the belief in the supernatural continues into today.

Today, some of the most advanced tools of technology are used in investigating ghost claims, but one tool from Ancient times remain – the human mind, and with that people will continue to debate whether or not ghosts exist.