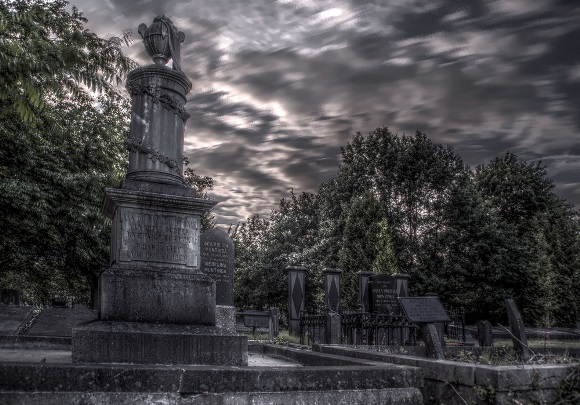 Some dark nights of the year, terrible things like to lurk through cemeteries looking for something to eat.

Erin Cole is a dark fiction writer from Portland, OR with stories appearing in over 50 print and electronic publications, including Dark Eclipse, Eschatology, Aoife’s Kiss, Every Day Fiction, and more.  She is the author of the mystery novel Grave Echoes and the horror anthology collection Of the Night.  See more of her work at www.erincolewrites.com

When darkness descended, so did they. But today, it wasn’t just any darkness. It was one within a day, a night without a night.

Sylvia balanced herself on the tip of her toe atop the steeple of her father’s grave. Only from there could she see the black river at the bottom of the Riverside Cemetery. It could have been tar or wet strands of ebony hair the way it looked so still.

Except, beneath the calm of its surface, cocoons of evil thrived, far beyond anything that lived in the cemetery. There, in the deep murk of grime and silt, wild phantoms roamed. The kind that had mouths too large for their faces, fingers too long for their hands. The kind that ate ghosts.

Nell, an elder in her death, frequently walked the tracks behind the cemetery. Though they had found most of her when she died, there were still a few bone chips left, probably buried beneath quarried rock underneath the bridge. She thought if she could find them, she could leave this place and its phantoms for good.

Sometimes Sylvia helped her, but she hated going back to that spot. It was she that Nell had seen driving across the tracks that foggy day in autumn. The ghostly sight of Sylvia in Nell’s review mirror had caused her to stall the car. The five o-clock train missed its last stop.

Nell returned to the cemetery, content with a handful of aluminium disks and reflectors that blinked at the signal junctions. Aluminium was the only reflective metal capable of mirroring the light of a ghost.

Nell held up a disk and looked at herself like a long, forgotten twin. Her hair stood out in a circle as if she had licked a light socket. She combed it down, but it sprang back up again.

Henry, the oldest spirit though youngest in death, paced at the base of a marbled monolith. “Do you see them coming?” he asked Sylvia. The last time the phantoms came, they ate his family. Tore them right out of their graves, squeezed them small, and swallowed them with distended jaws in one bite.

At the mention of them, Nell dropped the disk to the ground and looked toward the river with amplified eyes.

“No,” Sylvia said. “I don’t think they’ll come out until it’s perfectly dark.”  Henry blanched himself to near invisible. Sylvia drifted down and wrapped a pallid arm around him. “We’ll think of something. Don’t worry.”

Hazel, the newest spirit, soared up from her post at the crematory. “What about the mausoleum?” she asked. “We could hide in the vaults?”

“No,” Sylvia said. “They’ll find us there too.”  She turned to the moon, which only a moment ago, had been kissing the sun. Now, a scoop of blackness ate the light.

Hazel drew closer to the group, her eyes ever watchful of the river. “Then how did you escape them the last time?”

“Many of us didn’t,” Henry said. “They fled once the light returned.”

“There must be something we can do.”  Hazel looked to both Sylvia and him.

Sylvia fixed her eyes on Nell’s reflectors. “Nell?  Do those reflectors still blink?”

Nell picked one up and turned it over. “I think so.”  She flicked a switch on the back. A bulb blinked behind the red lens.

“I have an idea.” Sylvia picked up three of the reflectors and handed one to each of them.

Henry accepted the reflector with a restrained take. “Railroad reflectors?”

“The phantoms hate light,” Sylvia explained. “This should be bright enough to at least slow their assault.”

“Looks like we’ll find out soon enough.”  Hazel pointed to the sky. “Look.”

With the bottom side of the sun missing, it looked like the carved eye of a pumpkin.

“Sylvia?” Henry said, tapping the vaporous form of her elbow. “The river is moving.”

Boiling waves stirred the black waters as though a great mythical beast were surfacing. Clawed, contorted hands jabbed through the ashy froth.

Everyone gathered beneath the overhang of an old crypt, switching the reflectors on and clutching them tight between rigid, frostlike fingers. The sun waned to a sliver of gold.

“Yes, but not until I tell you to do so,” Sylvia replied. “We must surprise them … and whatever you do,” she looked specifically at Hazel, “don’t let them touch you.”

None of them answered her. Their gazes wandered instead to the dark shapes crawling up the bank.

Sylvia tightened her grip around the reflector. “Get ready.”

The last spark of sun snapped into the darkness, leaving a dim ring of light in a black sky. Shadows submerged down on the cemetery, skating across the ground like giant insects. A cold draft of putrid air enveloped them.

“Now.” Sylvia shined the blinking reflector into the drapes of night.

In obscured, rapid clashes, the phantoms rushed the crypt’s perimeter with shrill wails that escalated into howls. The cold breath of one plumed at Sylvia’s back. She spun around, holding the reflector out at the face of a phantom. Under the pulse of red light, she saw the phantom’s sharp, stunted nose and massive jaws crowded with crooked, shark-like teeth. Mineral-green fire ignited over its shoulders and head. Red-rust eyes warped in rage before its shadowed form ruptured into a giant flame. It crackled and disappeared with a spark of light . . . remnants of the ghosts it had eaten, Sylvia thought taking a faded breath.

Two more flashes spouted around the backside of the crypt. Sylvia heard Henry holler. She ran toward the sound of his voice. A phantom had cornered him at the base of a monolith. His reflector wasn’t on. Though Sylvia couldn’t see Henry or the phantom, she knew that the phantom was breaking its jaw open into an abnormally, large cavity and trying to swallow Henry head first.

She screamed and pointed her reflector at it, striving for the phantom’s attention before it touched Henry, if it hadn’t already. A small green hole burned into the phantom’s back. It screeched and burst into a giant flame, then vanished into a speck of light.

“Hurry, quick,” she said to Henry, reaching for his hand. “We have to find the others.”

They followed Hazel and Nell’s shouts from the other side of the mausoleum. A phantom roared, and a reflector was tossed to the ground. Sylvia caught the crouched form of Hazel in the reflectors dim light, shivering beneath the putrid breath of the phantom.

She tracked the sound of hissing, a phantom squeezing Nell small. But a sharp ray of sun glinted through the nighttime sky, piercing slices of light into the dark. The phantom over Nell shrieked as it sizzled. It burst into an orange blaze before sparking out of sight. The rest of the phantoms shrank down the hillside, oozing like fluid silt back into the black of the river.

Nell laid backside on the grass. A large black cut extended from her chin to the bottom of her shoulder.

“No,” Sylvia cried. She wiped at cold tears. “You did it, Nell. You helped us kill the phantoms.”

“No, you did.”  Nell grabbed Sylvia’s hand in both of her own. Her voice wheezed as she spoke. “It wasn’t your fault, that day on the tracks. You have to stop blaming yourself.”

“I don’t deserve forgiveness.” Sylvia said, stifling a sob back.

Sylvia pulled Nell to her, but her form dissipated through her fingers like grains of sand, then she vanished. Sylvia directed a teary-glare at the black water. Once again, it appeared calm, empty. The moon had slid halfway across the sun. The light of a red dusk cloaked the landscape, tinting the cemetery in a blood-red haze.

Sylvia picked up another one and tried to turn it on, with no luck. “The phantoms must short them out. We’ll need to get more.”

Hazel looked to the river. “Why?  The next eclipse is months away.”

“It’s not just eclipses,” Sylvia said. “There is a new moon in two nights.”