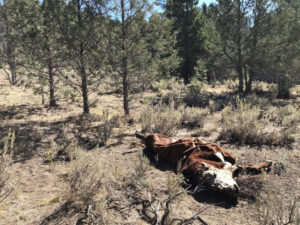 For over 40 years there have been reports of cattle mutilations across North America, and beyond. There have been speculations for years as to what is doing this; animals, humans…and very often there are whispers of aliens.

The animals are often discovered with various organs removed, including hearts, eyes, and noses with what appears to be surgical precision, with often indications of a burn mark are left on the skin, leaving one to wonder if a laser-type instrument was used to remove these parts.

So many mutilations were occurring in farming communities at one time that the FBI was called in to investigate, and to this day, no formal explanation has been provided. Hysteria soon centered around sightings of a creature later named the Chupacabra, translated roughly into goat-sucker. The physical descriptions of the creature vary, but it’s generally described as small, with a row of spikes along its spine to the base of a tail. The first reported sighting of a chupacabra was in 1995 in Puerto Rico, where eight sheep were reported discovered with three puncture marks and drained completely of blood. Sightings of the chupacabra extended beyond Puerto Rico, into the United States, Dominican Republic, Argentina, Colombia, Chile, Peru, Brazil, and with sightings recently in India.

Just days ago in Oregon, five purebred bulls worth $6,000 each were located dead on a ranch, drained completely of their blood with body parts expertly excised. The FBI will not confirm or deny that they are involved in these recent mutilations. However, two years ago something similar occurred in Oregon as well, with cattle mutilations being reported in the state as far back as the 80s. In that case, the eye witness claims there was not one drop of blood remaining.

A $25,000 reward is available for information regarding Oregon’s most recent case.

When asked what theories there are, a lot of people point to aliens.