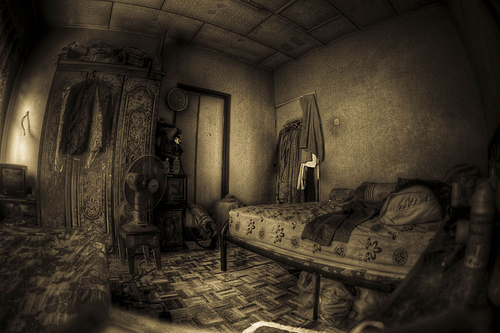 The Undertaker told me something silly the other day. It was late at night and I couldn’t sleep so I sat in my room reading. As he passed my door he said “Get to bed or the bogeyman will get you.”

“What does that even mean?” I said, but it was too late. He had already retreated to his room. Children are threatened by their parents to get to bed, or else the bogeyman will “get them.” I’m clearly not a child, but still the Undertaker’s threat did encourage me to want to get to sleep sooner than I had originally intended.

It sounds a bit cruel if you think about it a parent, or both parents, telling their small child that if they don’t go to sleep, or behave accordingly, then an evil creature will come for them as punishment. Across all cultures and on every continent you will find variations of a bogeyman. The word “bogeyman” is derived from Middle English with “bogglelbugge” to mean “bug” and böggel-mann in German.  The bogeyman is typically male but there are locations where the menacing figure is a female. Regarding what it looks like that really varies from place to place. Overall the bogeyman has no universal set of distinct features. One thing little children are certain about is that this figure lives in the dark shadows of their room, under their bed, in their closet, or even sometimes in their drawers or cabinets. Children fear ever meeting eyes with it because if they do they believe that the creature will terrorize them or worse – drag them away to some dank lair and eat them.

So how did the bogeyman even come to exist?  Does he exist because children saw him first and told their parents? Or does he exist because parents told their children that a dark, slimy, sharp clawed creature would come and get them if they disobeyed them? Whether he was born from an idea that was planted by adults or from the imagination of children the bogeyman exists in the minds of many who fear ever coming into contact with him or her.

Here is a list of some countries with the names of their local bogeymen and bogeywomen.

Bahamas – Small Man will toss children into his cart that are outside after sundown.

Bulgaria – Talasm is a dark, hairy ghost that lives in the shadows and comes out at night to terrify young ones.

Denmark – Bussemanden reaches out from under the bed to grab children who are still awake.

Egypt – Abu Rigl Maslukha is the ghost of a burnt child who returns to capture naughty children. He then cooks and eats them.

Finland – Mörkö is a large, round, blue ghost that terrorizes kids with his sharp teeth.

France – Le croque-mitaine crushes the hands of bad little ones.

Germany – There are several names for the bogeyman here, Der schwarze Mann, Buhmann  and Butzemann. In Germany, he hides in the dark places waiting for the right time to strike.

Iceland – Grýla is a female troll who eats wicked children.

India – there are many names for the bogeyman here. There is Karnataka, Boochodu, Kokkayi or even Kaan Khowa.

Japan – Namahages are demons that tell children to not be lazy or cry.

Nepal – The Hau-Guji is an ape-like creature who likes to eat bad kids.

Netherlands – Boeman is dressed in black and has sharp claws and fangs. He hides under beds and in closets. Once he captures a bad child he drags them off to the basement.

Pakistan – Here parents warn that Jin Baba will come for those who are bad.

Quebec – Bonhomme Sept-Heures  goes around homes at 7 o’clock and takes bad children away with him to his cave where he eats them.

Bosnia and Herzegovina, Croatia, Serbia and Macedonia – Babaroga is a cruel old lady with horns that tosses bad children in her sack and takes them off to her cave to eat them.

South Africa – Antjie Somers is thought to be the ghost of an escaped slave who tosses bad kids in his bag.

Sweden – Monstret under sängen is literally the monster under the bed.

There are many more monsters under beds and in closets. There is the Bag Man, or Sack Man, and of course throughout the America’s there is the Coco, Cuco, or Cucuy. I will tell you more about these later, but for now I think I should turn off the light and go to bed before something gets me.

2 thoughts on “There is a monster under my bed”