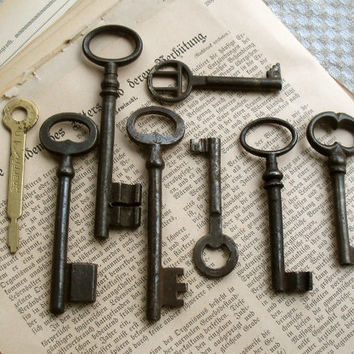 Skeleton Keys, there’s something nostalgic about them. Keep an eye out and you may notice that keys have become a decorative item in some homes. People have taken to hanging old iron keys in their home or leaving them out for display, but why? First off, old keys are good luck. So if you have any old keys in your home it doesn’t hurt to keep them hanging around a little longer.

Keys were once almost entirely made of iron and have been considered lucky items for a very long time. It was thought good luck to touch a key when one felt they were entering a dangerous situation because keys were thought to keep you safe. Oddly enough, I always seem to clutch onto my keys when I’ve found myself outside and felt fearful of where I was walking. Holding on to my keys added some sense of comfort. In addition to touching your keys for safety it’s thought that if you sense an evil spirit nearby that jangling your keys will make it leave. Another way keys were used to bring safety was placing a key beneath a sleeping child’s pillow as it was thought that a key there would keep them safe.

There are also bad luck superstitions associated with keys. It’s thought bad luck to drop keys. It’s thought even worse luck to accidentally break a key. If you’ve ever lost a key, well, it’s good to panic because losing keys is considered an omen of disaster, typically involving death.

Now, take a look through your old set of keys. If you find a rusted key keep it because a rusted key is a sign of good luck and typically means you will be receiving an inheritance.