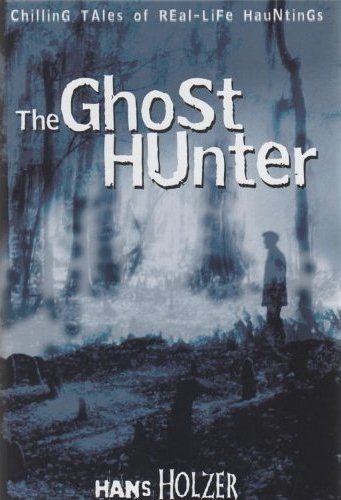 1. How did your interest in the paranormal begin?

I started going to the library and reading ghost stories because my mom wouldn’t allow me to watch or read anything that had to do with the paranormal, even the Goosebumps series. Watching “Unsolved Mysteries” with my grandmother was a treat for me and I remember always on the edge of my seat waiting for the ghost and alien stories to appear.

2. You founded a paranormal research team. Why did you do that?

I want to help people better understand their experiences and what they are going through. Maybe it’s because I didn’t have that growing up.

3. Do you recall your first investigation? What was it like?

My first investigation was when I was a teenager, about 14 or 15 and I remember it was right after reading The Ghost Hunter by Hans Holzer and I decided I wanted to go out there and check it out for myself. It was an old abandoned bakery where the owner apparently killed himself and his family. I’m probably admitting to a crime here, but I crawled under the cast iron gate and climbed through the window and did my first EVP session.

I also enjoyed going out to cemeteries and going to Old Town San Diego and looking for ghosts. In a way, I was trying to recreate my own experiences and see if there were any repeats.

Research is key and probably one of the most important elements of investigating. You have to do your research by interviewing the clients, researching the history of the building and property, and researching basic skills that are outside of your knowledge. This will help in finding correlations between the client’s experiences, and what kind of events the property has been through like a death, turbulent household, etc. You can’t blindly go into an investigation and assume that every bump in the night is a ghost. You have to research the client’s experiences and research the property, and not in a historical sense, but a contractor sense.

For example, sometimes we have to tell the families or business owners that what they are experiencing isn’t paranormal, but instead creaky floorboards, bad plumbing, or faulty electrical wiring. But it’s important to tell the clients that there isn’t a supernatural occurrence going on. In the case when we do run into something we can’t explain, we will bring in someone with psychic abilities to give us their take and research from there.

5. Is there any place you will not investigate?

Unlike my teenage years, I will not trespass, and investigate any location without permission from the owners. Not only to protect my team and myself legally, but to protect our health. If we trespass and investigate an old building we would be exposing ourselves to mold, asbestos, and many dangers that could get me and my team seriously hurt, or worst, killed.

6. Which is the most memorable place you have investigated? Why?

That’s a good question. The most memorable place I have investigated was a client’s house that was overpowered by a very dark presence. It was the first investigation where it was so active. I had considered calling off the investigation because my team and I were being beaten emotionally and psychologically. We heard audible growls. We had objects flying off the shelves, and during an EVP session something smacked the side of the bed I was on. It had been a long time since I had an active investigation like this, and the pressure was on because this case involved a child. I ended up having to bring in several experts to assist on the case along with consulting experts who were out of state. Networking is key in this field.

7. What is the one piece of evidence that you feel is your prize thus far?

The one piece of evidence that I would consider my prize would be my team’s prize. A few members of my team were returning the keys to a building we were investigating and they heard a little girl’s voice say “Mommy.” It was 3am in downtown San Diego on the 4th floor and we were the only ones in the building. I’m still trying to find an explanation. But my guys heard it, and it was captured on audio recorders and the mic on the video camera. That’s pretty remarkable.

8. What is the place you hope most to investigate?

I would love to investigate Waverly Hills in Louisville, KY, Alcatraz in San Francisco, CA or the former West Virginia Penitentiary in Moundsville, WV. I also would love to go to Europe and investigate all the old castles and churches.

9. What do you hope to continue contributing to the paranormal community with your efforts?

I hope that I continue to encourage and progress the constant pursuit of knowledge in the paranormal community. I always encourage my team to “be open to anything and question everything.” And what that saying means is keep an open mind to all the different possibilities and that means more than just the paranormal aspect, but also be open to all of the possibilities of logical explanations, which is where the question everything part really comes into play.

Right now, I am putting my team through some rigorous training to expand their paranormal knowledge by doing a monthly research topic with quizzes.

I am researching the paranormal in Elizabethan times by looking for correlations in literature and moments in history and hoping to put it all together in a book. I’ve started out with plays by Christopher Marlowe and William Shakespeare as well as King James I’s Daemonologie. I love researching paranormal aspects in history because it is the foundation of our beliefs today and whether we know it or not, our beliefs have evolved from the beliefs of the past.

Alex Matsuo is a college graduate with a Master’s degree in Theatre as well as an actress and working as a theatre teaching artist to pay the bills. In September 2011, Matsuo started the Association of Paranormal Study (APS) so that she could start helping others understand their paranormal experiences. Alex has always been aware of and actively sought knowledge on the terrifying and bizarre world of the paranormal. Now she’s ready to share that knowledge and put it to use. Alex is constantly on the pursuit of knowledge in the paranormal field and actively participates in the paranormal community corresponding with fellow investigators around the world. She strongly believes that being in the constant pursuit of knowledge is key when investigating the paranormal because the unexpected will always manage to surprise you! Alex hopes to be able to help those who are experiencing the paranormal by collecting evidence, finding explanations and finally come to a solution. She was inspired to investigate by her own experiences with the paranormal while she was growing up and since then she has been in the pursuit of the truth.