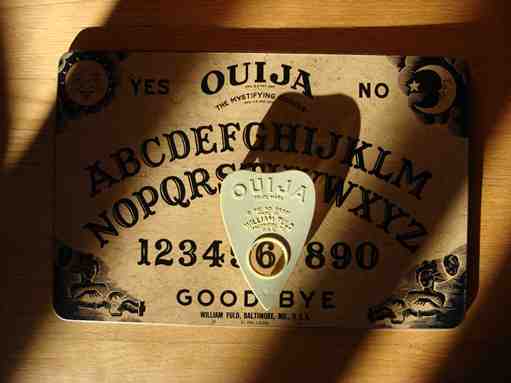 We are continuing on with our series for the Halloween season discussing potentially haunted places and things. I once asked the Undertaker if I could purchase an antique Ouija Board to hang up on my wall, just because I liked the way the black letters looked on the wooden board, and of course because it was such a peculiar item. He quickly said no, and said he would rather have me set up a medical skeleton in my room than a Ouija Board. The Undertaker is a rational, scientific man and believes only in those things that he can see, but something about having a Ouija Board in his house did not sit well with him

The Ouija board as we know it was patented by Elija Bond and Charles Kennard in 1890. William Fuld who worked for Kennard would go on to oversee the production of the game. It was Kennard who claimed he coined the name Ouija, but it was Fuld who said the name of the game was a blend for the French and German word for ‘Yes.’

Spirit boards and automatic writing intended as a means of communication with the dead can be dated as far back to ancient India, Greece and Rome. Yet it was the mass market produced branded Ouija Board in the late 19th century that popularized its use. The belief system of Spiritualism, that held that spirits could communicate with the living through mediums, was at its peak during the production of the Ouija Board, and so, in addition to curious novices buying the board so did psychics and mediums. Master and famed magician Harry Houdini spent significant time during his later years exposing not only fraudulent psychics but mediums as well – many of whom used the Ouija, claiming they could communicate with a recent lost loved one of someone in grief. Regardless of the evidence Houdini presented against the Ouija Board’s ability to communicate with the dead, its use and imitators increased.

The game board soon became a popular late night activity for teens. Many have found themselves sitting in their parent’s basement, with a friend across the table from them with their finger tips on a planchette asking the standard first question ‘Is anyone there?’ As many of you know, the use of the Ouija Board has become a popular feature in horror literature and film. The Ouija as a thrilling horror device was likely popularized by the Oscar-nominated movie immortalized by William Peter Blatty’s best-selling novel The Exorcist. We all know the film – a young girl plays with a Ouija Board, becomes possessed, a Catholic priest is called in, a head spins – literally, and people die. According to Blatty, the novel was inspired by the case of a young boy, not a girl as portrayed in the film. Investigation has shown that the young boy became distraught after his aunt died. She was a spiritualist who had taught the boy how to use the Ouija Board. After attempting to communicate with her spirit using the Ouija alone, it is claimed the boy contacted a demonic entity and became possessed. An exorcism was performed by the Catholic Church.

Claims of possible possession from using a Ouija seem to stem from Evangelical Christian and Catholic warnings against using it. Although, repeated scientific research has proven in laboratory experiments that the movement of the planchette by users to the ‘Yes,’ ‘No,’ or letters on the board to spell out words all stem from the ideomotor effect – a phenomenon where a person makes unconscious motions.

People continue to be fascinated with death, and for those that have had a love one die the possibility of even a few words in exchange seem cause for motivation to use a spirit board. Today, the Ouija Board continues to be sold and can be found in places like Toys R Us, Target, and even variations on it such as The Psychic Circle: The Magical Message Board at Walmart.

So does a spirit board, or the Ouija Board have the true ability to reach out and communicate with the dead? Can a parlor game lead to demonic possession (if you believe in demonic possession)? Or, as psychologists and even legendary illusionist Harry Houdini have claimed – the movement of a planchette beneath ones finger tips is really the user consciously, or unconsciously, moving it because they feel that is the expectation?

Regardless of what you believe, I will not be getting one – ever according to the Undertaker.

One thought on “Is it haunted? The Ouija Board”