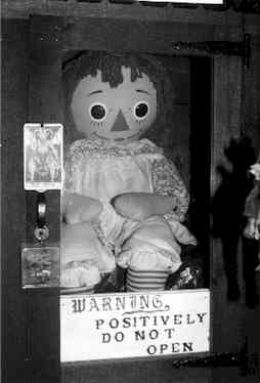 We are now a full two days into autumn and seeing that we are but a mere few weeks away from Halloween, I would like to focus the next few of my topics befitting the season, and by this I mean I would like to cover things that have been known to cause or stir fear – more specifically, I would like to discuss a few places and things that are thought to be haunted. Therefore, for our next few blog posts we will focus on scenarios that have left people perplexed, or changed, by what they have believed to have been a supernatural encounter.

Now, I will preface that we are not saying that we believe that haunted places or objects do exist. What we are acknowledging is that there are people who have believed strongly that they have found themselves in a haunted location, or have come in contact with a haunted item.

By now, I am sure you all are aware of the popularity of the ghost hunter paranormal reality show program. This category has become so popular that there have been ghost hunter programs on individuals focused on applying scientific theory to cases, those that have incorporated the study of cryptozoology in their research, those that have used religious intervention as a means to combat purported hauntings and even those whose sole focus is the study and the location of haunted items.

We are going to be discussing a famous case of a haunted item, and no, we are not going to be discussing the Dybbuk box. We discussed that last week. Please see last week’s blog post. We will admit that our interest in the Dybbuk box did support our interest in conducting further research on haunted items, and given the holiday season we felt it was fitting to explore further.

The Undertaker laughs at me because I sleep with a battered, old teddy bear. I’ll allow a moment here for you to laugh…

Now, the Undertaker does not mind the aged teddy bear, but what he is admittedly nervous around are antique dolls. We frequent an antique shop close to our home that sells curious items, such as vintage taxidermy, and medical or funerary antiques. The items that cause great distress in the Undertaker are typically old porcelain dolls, and his fear of them made me think of Annabelle.

The story of Annabelle occurred in the 1970s. A mother entered a hobby shop and purchased a vintage Raggedy Ann Doll for her daughter Donna, who was at the time a nursing student. Donna was living in a small apartment with Angie, a fellow nurse. Donna had placed the doll on her bed and within a few days began to notice that the doll’s position shifted-slightly. Eventually the doll would be found away from Donna’s bedroom, in other rooms in the apartment. There were times where Donna reported leaving the doll on the sofa before heading to school only to come home and find that the doll was on her bed. No one else was in the apartment at the time.

Strange notes began appearing throughout the house on pieces of parchment paper in a child’s scribbled hand. The notes read “Help us,” or “Help Lou.” Besides being troubled that the notes were referring to one of their friends Lou, they were also troubled that parchment paper was the material being used – considering they had never purchased parchment paper. The girls would go on to call a medium to the apartment who communicated that the spirit communicating was that of a seven-year-old girl that had died in the area of the apartment complex years before. Donna feeling sympathetic with the dead girl’s story said that the spirit of the girl could remain in their apartment, in the doll.

The friend Lou would go on to spend a few troublesome nights in the apartment. He claimed to suffer from terrifying episodes of sleep paralysis. One day, when he entered one of the rooms to investigate a rustling sound he found the doll on the floor. When he heard someone come up behind him, he turned to find no one, but suddenly he felt a sharp pain across his chest. He would go on to find claw marks on his skin.

An Episcopalian priest, Father Hegan, was contacted by the girls. Father Hegan, after investigating, felt he was not equipped to deal with this level of sensitivity. He then contacted Father Cooke who reached out to famed demonologist Ed Warren and his wife, psychic Lorraine Warren. (I will certainly speak further about the legacy of the Warren’s later on.)

After investigating the case, the Warren’s determined that the doll itself was not being inhabited by a spirit, but was being manipulated by an inhuman presence. They believe that spirits cannot inhabit objects, but that inhuman entities can manipulate them. The Warren’s believed that the entity was not looking to remain attached to the doll, but was searching for a human host to possess.

Father Cooke would go on to perform the recitation of an Episcopal blessing, or an exorcism, to cleanse the apartment of any negative energy. The Warren’s then agreed to take the doll with them. They later reported their drive home with the doll nearly killed them, as they experienced sudden steering and brake failures.

The doll would go on to move about the Warren’s home, being found in rooms where she had not been originally set. A young priest who visited the Warren’s, Father Jason Bradford, when visiting Ed Warren, would go on to lift the doll and dismiss it as just that, a doll. On his drive home, the priest’s brakes failed. His car was destroyed in a crash but he survived. The Warren’s soon created a special case to store Annabelle, to minimize her contact with people. Over the years they had acquired a collection of strange items, many of them they reported as haunted, and this became their Occult Museum. Annabelle was stored in the Occult Museum, in her special case.

One day, a young man and his girlfriend visiting the museum became intrigued with Annabelle. The man repeatedly tapped on the glass of Annabelle’s case challenging her to scratch him, referencing Lou’s previous accounts. Ed Warren, troubled by the patron’s actions, asked them to leave. They left on their motorcycle and after a few moments on the road they crashed. The man was killed instantly and the girlfriend remained in the hospital for many months. When she was asked what they were doing shortly before the accident she said they were laughing about Annabelle.

The doll remains in the Occult Museum to this today. There are still claims that she continues to move about her surroundings, regardless of her case.

Now, whether or not you believe in the validity of this haunting, the accounts of the Warren’s, or of any hauntings for that matter, there is evidence that people did and do continue to believe that something about this doll influenced external behaviors. For example, the doll itself caused a medium to be contacted, as well as a demonologist and psychic, a blessing/exorcism to take place, and most troubling people believe that this doll caused the near death of two people and the death of one person.

Regardless, all I know is that the Undertaker does not like old dolls, perhaps for this very reason. I will keep them out of our house, but I will certainly keep my worn teddy bear.

One thought on “Is it haunted? Annabelle”