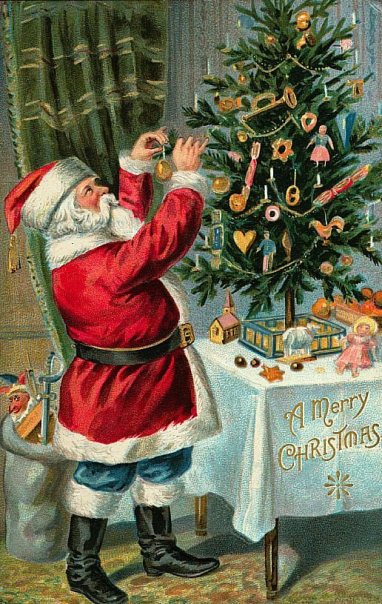 There are so many Christmas traditions, superstitions and customs that vary from country to country and varying regions as well. Many of these practices were established so many years ago that we have forgotten why it is that we take part in these rituals. The Christmas holiday is a great time of feast, family and celebration. Many people celebrate this time of year for the Winter Solstice, or for the remembrance of Jesus Christ’s birthday, while others have no set of religious or spiritual beliefs but still enjoy celebrating this time of year for the seasonal change.

Regardless of why it is that you celebrate this time of year, we wanted to provide you with a few superstitions surrounding some of the decorative and ritualistic customs that Christmas brings each year.

Evergreens
Evergreens are used as decorative items for their belief in enduring and restoring life. There is a superstition that decorating the home with vegetation ensures the return of vegetation at the conclusion of winter.

The centerpiece evergreen in most people’s homes during this time of year is the Christmas tree.

Holly
It is thought that holly has protective powers. This lovely plant is believed to guard against witches and lightening.

Mistletoe
This little plant is believed to do more than to encourage, or pressure, people to kiss you.

Unmarried women, once upon a time, would hide sprigs of mistletoe under their pillow with the belief that the plant would give them the power to have dreams about their future husband.

For those of you not particularly excited to kiss the person you’ve caught yourself standing with beneath a mistletoe you’ve been warned – avoiding a kiss under a mistletoe is said to give you instant bad luck for a year.

One final note on mistletoe: Do not get rid of the mistletoe at the end of the season. It is bad luck to remove it from the house until it is replaced next year, which means once you bring it into your home you essentially have to repeat the tradition of hanging a new one up each year.

Ivy
Ivy, typically, should never be brought into a home because of the belief that it is bad luck. If it is in the home, and someone is ill, you should immediately remove the ivy from the house.

Fire
This is a frightening superstition.  On Christmas night, as you all are sitting around the fire, look to the shadows being cast by the flames. If one of the shadows is missing a head, that person will die within a year.

Christmas Cake
In the 19th century it was customary to eat Christmas Cake on Christmas Eve. However, it was bad luck to cut into the cake before dawn. A portion of the cake was also supposed to be saved for the next day, Christmas Day, for good luck of course.

Mince Pies
These mini pies were meant to be eaten in one bite. You were not supposed to cut them, as doing so would “cut your luck.”

Letting Christmas In
At midnight on Christmas Eve the doors of the home were flung open to let out all of the evil spirits. The first member of the household to wake up Christmas Day is supposed to open the door and shout “Welcome Father Christmas!”

Carolers
If you have carolers at your door do not turn them away. It is also unlucky to have them leave empty handed. Food and drink are the preferred gifts.

Work
It is said to be unlucky to do any work besides the necessary house work on Christmas Day.

Yule Log
Very few people have real Yule Logs in their home for the season, but they were once wrought with superstition and preparation. It was unlucky to purchase one. It should have been acquired from one’s own land. A scrap from the previous year’s log was to be kept under the homeowner’s bed and that scrap is what is used to light the current year’s log. The scrap under the bed was said to keep the home safe from lightning strikes and fire. The log should have been lit on the first try, if not, misfortune for the year was said to follow. It was then set burning for twelve hours. People told ghost stories or various folktales around the Yule Log.

There are many, many, many more superstitions, but we will not hold you. It is time to wrap presents, complete the final preparations for the Christmas Cake and bake the cookies you expect to leave out for Santa Claus.

We hope you all have a Happy Holiday and a Merry Christmas.