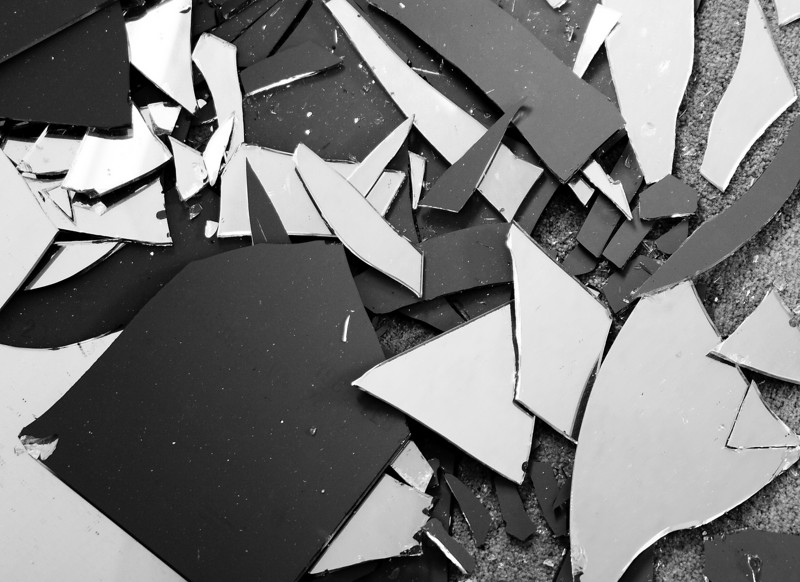 The Undertaker and I have not yet put up our Christmas tree as we have been busy. We at least made the effort of bringing down the boxes full of our Christmasy things. While sifting through the boxes, looking at ornaments I accidentally dropped one and it broke into bits. The Undertaker burst into the room in a panic. Although, once he saw me standing there, surrounded by broken glass he laughed.

“Seven years of bad luck for you now,” he said wagging his finger at me before turning and leaving the room.

I didn’t think seven years of bad luck applied to breaking a Christmas ornament, but this particular ornament was mirrored.

I am fascinated with mirrors. Not because I am vain or anything, but because of the power many people believe them to hold. The looking-glass, as some once called mirrors, are used for grooming, decoration, and in scientific instruments such as telescopes and cameras.

The first mirrors were pools of dark substances, or still water or water collected in a vessel. Smoothed and polished obsidian were the first manufactured mirrors and some of these that archeologists have discovered date back to 6000 BC. Smoothed, polished stones used as mirrors have been tied to ancient peoples from Turkey, Mesopotamia, Egypt, China, and Central and South America.

The modern mirror, made of a reflective coating applied to a plate glass was invented in the 16th century by the Venetian glassmakers Murano.

Now, there are many superstitions that surround mirrors. Some say they are a reflection of the soul. Some say they are used by witches for scrying (fortune telling). It is also said that a mirror can only show truth and so seeing something in a mirror that is not physically present in the room is obviously a bad omen. An older superstition says that new born babies should not look at their reflection in a mirror until at least their first birthday as their soul is developing.

Many Buddhist houses hang a small circular mirror in front of their main entrance as it is believed negative spirits can enter a house that has a triangular roof through the main door, but that this small mirror can prevent them from entering.

There is also a belief that two mirrors facing each other is bad luck.

As many of you know, a vampire can not be seen in a mirror and that is because the undead do not have souls and so can not cast a reflection.

I didn’t want to risk living with seven years of bad luck and so I followed another superstition, grinding up the mirror to dust and burying it. Of course, the Undertaker found this quite funny, but he’s the one who started this whole superstition talk.