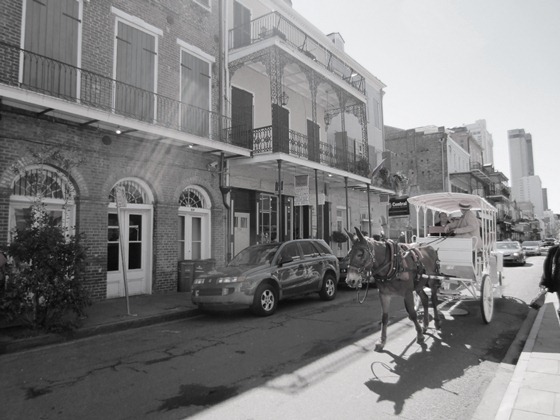 This past weekend the Undertaker and I spent some time in the reportedly most haunted city in America, New Orleans. We strolled through St. Louis Cemetery Number 1, left some mementos at the tomb of Marie Laveau, the great Voodoo priestess, and walked through the French Quarters at night listening to ghost stories, talks of witchcraft and Voodoo and of course to tales of vampire lore.

We will share some photographs soon of some of the lovely tombs at St. Louis Cemetery No. 1, but for now, below are some interesting ghost and vampire stories that we learned while we were there.

In 2006, Zachary Bowen, a 28 year-old Iraq War hero threw himself off the ledge of the Omni Hotel in New Orleans. A note was found on his person that read to check on Addie. When investigators arrived at the apartment he shared with his girlfriend Addie no one answered after repeated knocks, yet the officers could smell what was described as dinner being made. After further attempts at knocking no one came to the door and so authorities broke down the door. In the kitchen they found the dismembered body of who later was identified as Addie Hall. News reports indicated two boiling pots were found on the stove, one containing a females head and another pot containing hands and feet. In the oven, detectives found legs and arms in a basting tray.

Ghost hunters in the French Quarters say that Zachary continues to repeat his suicide. Many people have reported seeing a man leaping from the rooftop of the Omni Hotel. Some say he disappears right before he hits the pavement.

The New Orleans Pharmacy Museum once operated as a pharmacy. Built in 1823, the pharmacy was operated first by Dr. Duffulo and was later purchased by Dr. Dupas who is believed to haunt the museum today. According to reports, Dr. Dupas experimented on slaves, especially pregnant slaves. Some say he was trying to find a cure for Yellow Fever and he would inject these people with varying treatments. All of those he experimented on would go on to die of Yellow Fever. Reports state that bodies were often found piled on top of each other in his small courtyard.

Dr. Dupas would himself go on to die of Yellow Fever. He can be seen stalking the museum today in a brown suit, throwing books off shelves, moving items in display cases, setting off the alarm system and overall emitting his negative energy.

The Ursuline Convent dates back to 1718. At one point in the 1700s the ratio of men to women was problematic with men greatly outnumbering women. The local government went to the nuns at the Ursuline Convent and asked if they could request the French government to allow some women to be trusted to the care of the convent for a proper education. If after graduating the ladies found the calling to become a sister then they could surely stay at the convent or go on elsewhere for their work. Or, after graduating if they wanted to remain in New Orleans then the sisters could arrange an appropriate suitor for the young lady. When the sisters took this request to France the French authorities vehemently declined. At that time, America and New Orleans were seen as uncivilized and they would not allow young ladies to travel to such areas. The nuns then took their request to local, rural families who were struggling to financially support their children, especially their daughters. Some of these families agreed and three months later a boat arrived in New Orleans from France and a group of dirty, pale, and frail young ladies stepped on the land. Each girl was carrying a small casket in which they said held all of their belongings. The girls did not allow anyone to touch nor open their caskets. The caskets eventually were said to have made their way to the attic of the convent. Some people say that at one point the caskets were opened but nothing was found inside. Others say the caskets girls brought with them vampires.

Many people went missing after the casket girls arrived from France and eventually shutters were put on the attic windows. Legend says that each of the attic windows was sealed by 100 blessed nails from the Vatican. What’s most striking is that no other building in that area has shutters on their windows. Also, the nuns just left the convent one day without giving a full explanation why.

From time to time these days, there are reports of a window being spotted open and from time to time there are still reports of people going missing in New Orleans. The attic windows never stay open long as it’s said that 100 blessed nails arrive immediately from the Vatican to seal inside whatever lives in the attic. Today, the Ursuline Convent has been converted into a museum and people who have visited the museum have said there is no way to enter the attic. As far as the museum is concerned, the attic does not exist.

In the 1800s Jacques St. Germaine was a wealthy man who loved to throw parties in the company of multiple beautiful women. At these parties though, Jacques St. Germaine never ate any food. It’s said that he had a wine collection that held hundreds of bottles of wine in an impressive home in the French Quarter.

One evening, screams were heard and a woman was seeing throwing herself from the top floor apartment window. She survived the fall and in the hospital doctors found that she was covered in long cuts from which she said Jacques St. Germaine was drinking her blood. When he was approached by authorities at his home Jacques remarked that the woman was unreliable as she had been drinking. Investigators insisted that he follow them back for questioning. He said he would follow their orders but first needed to gather some things from his home. Minutes passed and when Jacques did not emerge the authorities entered his home and were surprised to find it sparsely furnished as though someone has just moved in, or out. Upstairs, they entered the master bedroom and found the walls covered in blood, the bed covered in blood and the floor completely covered in blood. When one of them began to regard a bottle of wine, it fell accidentally but instead of spreading across the floor the liquid slowly settled. After a quick examination it was determined that all of the bottles were filled with blood.

Jacques St. Germaine never returned to New Orleans, but there are rumors that a Jack St. Germaine currently lives down the block from the original home.