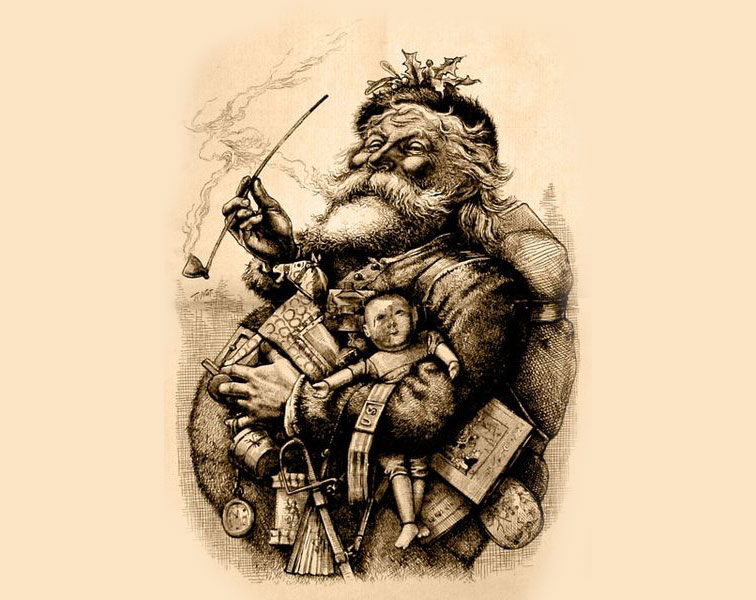 This is a great time of year! It is a time of celebration and also a time of traditions.

We hope that your holiday season is full of friends, family, peace and love, and maybe a superstition, tradition or two! Below is a list of a few Christmas superstitions that the Undertaker and I have put together for you to enjoy. There are certainly many, many, many more!

First of all, we like to say that there was indeed a Santa Claus, or at least a few Santas.

Nikolaos of Myra, or Saint Nicholas was a 4th century Greek bishop in what is today Turkey. He was known for giving surprise gifts to friends, family and members of the community. There are several legends that surround him. Here are two:

Legend of Saint Nicholas – There are varying versions of this story, but the one we enjoy the most is that a poor old man had three daughters and he was distraught because he did not have enough for their dowry. The night before the first daughter came of age Saint Nicholas left the old man a purse full of gold coins. The year before the second daughter came of age he did the same thing. The night before the third daughter turned of age the old man sat up late waiting to thank whoever it was that had helped him so much. Saint Nicholas, to be careful as he did not want to be known, tossed the purse of gold coins down the chimney. The daughters had hung up their stockings by the fire to dry that night and the purse full of gold fell safely into a stocking.

Modern Santa – American Professor Clement Clark Moore created the vision of the secular American Santa Claus with his 1863 poem, “A Visit From Saint Nicholas,” known popularly as “‘Twas the Night Before Christmas.” Moore’s vision of Santa Claus was inspired by Saint Nicholas, a fourth century bishop known for gift giving and Sinterklaas, the Dutch version of Saint Nicolas who also has some characteristics of Odin, a Norse god. In the poem, he is characterized as a chubby, plump, jolly old elf with a pipe and a belly “That shook when he laugh’d, like a bowl full of jelly.” This is the image we have of Santa Clause to this day.

Advent Calendar – a calendar used to celebrate the days of Advent, the days leading up to Christmas

Christmas Market – these are street markets that originated in Germany and Austria that are held typically the four weeks of Advent. One of the first was held in 1434.

Christmas Tree – the first documented use of a Christmas tree was by the Brotherhood of Blackheads, an association of merchants and ship owners who erected a tree for the holidays around the 1440’s. By the 16th century they were soon seen outside of churches with decorations. Some believe that a tree is meant to ensure the return of vegetation after the winter season.

Las Posadas – A nine day celebration starting December 16th and ending December 24th with origins in Spain but celebrated largely in Mexico. People go from house to house singing, requesting lodging, in memory of Joseph and Mary’s journey. At the end of each journey there is more caroling, food, and children break open piñatas.

Misa de Gallo – In the 5th century, Pope Sixtus III introduced  the midnight mass “just after the cockcrow” that is still celebrated to this day.

Mistletoe – Used as a Christmas decoration, it is bad luck to not kiss someone while you are both beneath the mistloe. Some areas do not replace the mistletoe until the next year as it is thought to ward away fires and lighting.

Nativity Scene – Also known as the Manger scene, a nativity scene depicts the birth of Jesus described in the gospel of Luke and Matthew.

Christmas Pickle – In this tradition, a glass pickle ornament is hidden in the Christmas tree and on Christmas Day the child who finds the pickle gets a special gift and will supposedly have a year of good luck.

Wreaths – Wreaths have been used for hundreds of years for adornments, but it was not until the 16th century in Germany that Lutherans began using them to mark the beginning of Christmas season.

Merry Christmas to all and to all a good night!